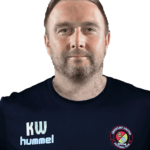 Kevin was appointed to the Fleet assistant manager’s job alongside Garry Hill in October 2019 after departing Hungerford Town. He was only in his job for two games before Hill’s departure, at which point he was handed the role of Fleet’s caretaker manager. Following an excellent start to that role, with his side playing good football to record three straight wins, he was confirmed as permanent manager in November.

He played for Tottenham in the early Nineties before carving out a long League career with the likes of Swindon Town, Rotherham United, Reading and Colchester United, winning four promotions including two into the Championship.