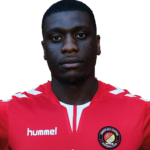 A powerful, imposing and pacy front man, Josh spent 11 years at Charlton Athletic, breaking into the first-team squad and appearing in the Championship in 2015/16. He was top scorer for Charlton’s U18s in the 2014/15 campaign, being instrumental as the Addicks youngsters won their Professional Development League 2 that season.

Temporary spells over the next few seasons at Kilmarnock in the SPL and then Wycombe Wanderers preceded a season-long loan in the National League in 2018/19 with Boreham Wood where Josh struck six goals from 16 starts.