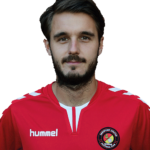 The former Woking player of the year reunited with his former Cards boss Garry Hill at the Fleet in July 2019. The wide man originally joined Hayes & Yeading United in 2012 from Reading’s academy and his next port of call was Woking where he was a key part of Hill’s side that came close to play-off qualification the following season.

Goddard’s third and final campaign with the Cards saw him named player of the year as he became top scorer from midfield.  Swindon Town pounced to sign him for an undisclosed fee on a three-year contract in the summer of 2015 and he made 42 appearances in League One in his first season.

A brief spell at Stevenage was followed by six months with Bromley last season and the back half of the campaign was spent at Aldershot Town. Goddard also has two caps for the England C national side.