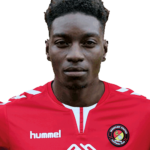 One of three signings in January 2020, Jermaine joined after his release from Swindon Town. The wide attacking player previously played for Fleet director of football Steve Lovell at Gillingham from 2014-16 and has made more than 300 appearances at Leagues One and Two level over the past decade.

The Croydon-born player, who can operate wide or behind the strikers, began his career in non-league with the likes of Staines Town, Kingstonian, Merstham and Ashford Town. He moved into professional football with Aldershot Town in League Two in 2010 before Cheltenham Town spent a reported £60,000 to bring him to Gloucestershire in January 2012.

After more than 100 games for the Robins, he moved to Kent and League One with Gillingham before spells at Southend United and Swindon Town. Last season he played 24 times in League Two for Swindon and also turned out in the National League for Wrexham and Chesterfield on loan.