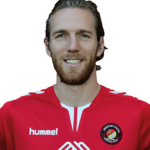 A summer 2019 signing, the former Dover Athletic skipper was recruited from League Two side Macclesfield Town.  The 6ft 2in Nottingham-born defender spent the last two seasons in the EFL and before that had plenty of experience at National League/Conference level.  Jamie came through the youth setup at Leicester City and Swansea City, enjoying loans with Haverfordwest County and Forest Green Rovers.

He moved on to Redditch United and Bedford Town in his early twenties before spending two years with Kidderminster Harriers. Two more years at Dover from 2015 to 2017 saw him score five goals in 77 games, helping the Whites reach the National League play-offs in 2015/16 before a sixth-placed finish the following season.

After multiple attempts to sign Jamie, Cheltenham brought him into League football in the summer of 2017. He spent a year with the Robins before moving on to Macclesfield Town and in total played 56 times in League Two.