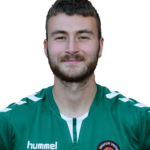 The 24-year-old goalkeeper joined in July 2019 from Canvey Island. Harry has also played for Braintree Town, Lewes, Haringey Borough, Dorking Wanderers, Brightlingsea Regent and AFC Hornchurch but it was at Canvey last season where he excelled. He won the manager’s and supporters’ player of the season awards last term with the Gulls, having previously helped AFC Hornchurch to an Isthmian North title and he has also trained with Southend United.