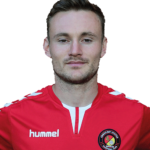 An ex-Republic of Ireland U21 international, central midfielder Frankie arrived at the Fleet in August 2019 after leaving Bromley in the summer. He was a big hit at Hayes Lane in his two seasons with the club, being a key part of the side that made it to Wembley in the FA Trophy Final.

Sutherland began his career as part of QPR’s youth system, also playing in the Football League on loan for Portsmouth, AFC Wimbledon, Dagenham & Redbridge and Crawley Town.  He previously played under Garry Hill for Woking in 2016/17, ending that campaign with Whitehawk.

After signing for Bromley in the summer of 2017, Sutherland featured 33 times in the league in his first season and a further 41 last year, playing and scoring penalties in both wins over the Fleet in 2018/19.