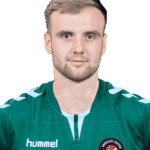 Signed on loan in January 2020 until the end of the season from Boreham Wood, David was a key member of the Bromley side that reached Wembley in the 2018 FA Trophy Final, saving a penalty at the National Stadium, and he helped Neil Smith’s team finish in the top half of the National League two seasons running.

An ex-Crystal Palace academy player, the 6ft 1in goalkeeper gained senior experience on loan at Harrow Borough, Sutton United, Bishop’s Stortford and Eastbourne Borough. He signed for Cambridge United in League Two following his release by Palace in 2016, making his League debut that year, but it was at Hayes Lane where he enjoyed a virtually unbroken spell in the National League.

In two seasons with Bromley, the popular Gregory missed only one game and made a total of 110 appearances for the Ravens, playing against the Fleet on numerous occasions. He moved on to Boreham Wood in the summer, starting the season as their No.1 before ironically losing his place when previous Ebbsfleet goalkeeper Nathan Ashmore was loaned in the other direction.