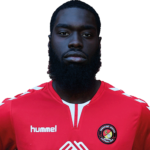 The 25-year-old, who has Football League experience with Dagenham & Redbridge, arrived at the Kuflink Stadium with plenty of National League games behind him.

The 6ft 3in former Sheffield Wednesday and Charlton youth played 42 games in League Two for the Daggers from 2014 to 2016 before making a move to Eastleigh where he enjoyed two seasons, playing more than 50 games and scoring 11 goals for the Spitfires.

An adaptable player, he was able to deputise at right-back on several occasions for the South Coast club and can also operate in midfield, a position in which he has also been deployed with the Fleet. He spent last season at Maidenhead United, where he contributed four goals in 37 National League appearances and featured in both matches against the Fleet.