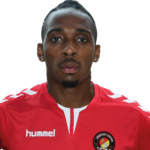 A left-back and former England C international who arrived in June 2019 with a wealth of National League experience, having spent the last eight seasons at this level. Aswad is a former Charlton Athletic youth who played in League Two with Accrington Stanley and Barnet on loan, before spending two seasons at Woking where he helped them to the Conference South play-offs in 2010/11.

A year at Braintree Town yielded the club’s supporters’ player of the year award and then more play-off experience followed with Grimsby Town, who signed him for a five-figure fee. He was also an FA Trophy runner-up with the Mariners.

Aswad also enjoyed play-off qualification with his next two clubs, helping Dover Athletic to consecutive top-six finishes as the Crabble side made the semi-finals in his first season.  In 2017 he moved on to Sutton United, playing 38 times as Paul Doswell’s team reached the play-offs and added another 29 appearances last season as the U’s just narrowly fell short of the top seven.