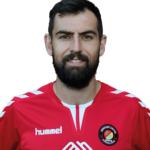 A highly adaptable midfielder, who has also operated in a defensive role, he joined the Fleet in June 2019 after two years at Leyton Orient, where he picked up the second National League winners’ medal of his career.

Alex, who has played for his country at U21 and semi-professional level started out with Ton Pentre, before being signed by Fulham and going on to play League football with Torquay United. Spells at Forest Green Rovers and York City followed, before Luton Town paid a fee for his services in 2011.  Alex went on to play more than 200 times for the Hatters, appearing in two play-off finals, lifting the club’s player of the season trophy in 2013 and then winning promotion back to the Football League with them in 2014.

He played two seasons in League Two with Luton and another at that level with Yeovil Town before agreeing a two-year contract with Leyton Orient in 2017, where he played 18 times last season including both games against the Fleet.