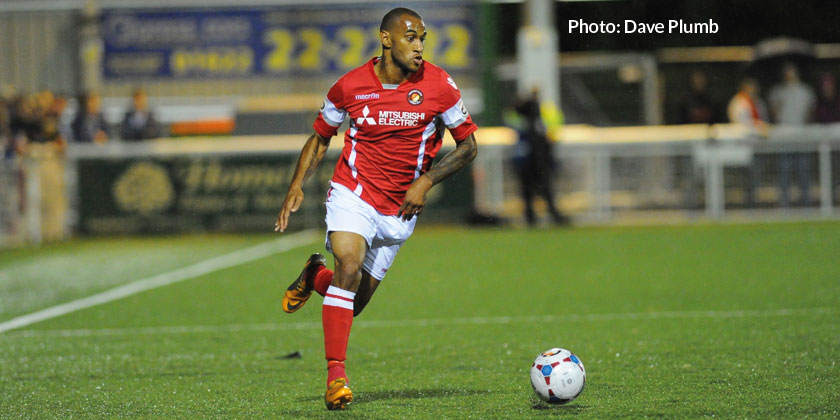 Squad players ‘chomping at the bit’ for their chance

Daryl McMahon goes into tonight’s game against bottom club Weston-super-Mare knowing the expectation is growing among Fleet fans – particularly as the Seagulls have shipped 12 goals in just three games.

The Fleet boss was playing his cards close to his chest about whether he might be tempted to go for a more attacking line-up against Weston – but he admitted that, while changing a winning team wasn’t necessarily imminent, the attitude of his squad players has given him food for thought.

“I’ve thought long and hard about when to start shaking things up, or if we need to,” McMahon told FleetOnline. “Because I have to say the lads who haven’t played or those who have sat on the bench, they’ve trained incredibly hard. At Maidstone and St Albans, the lads who were in the stand were training on the pitch after the game to keep themselves fit.

“The togetherness is fantastic. But none of those players wants to be left out, they all want to play, and I’ve got to find the balance there. If the boys in the team are playing well, the other lads just have to bide their time. They’ve been terrific and they’ve helped the players in the side maintain their form because they know there’s someone behind them chomping at the bit, training hard, wanting to nick their shirt. Every day in training’s been very competitive.”

As Danny Haynes’ (pictured) fitness gathers pace with each appearance, there is the option of giving him a full 90 minutes – not to mention the fact that Adam Cunnington is also available. It’s that kind of firepower that Fleet could unleash on Weston, but the manager is fully aware that the Seagulls will look to keep things tight and chance their arm on the counterattack. “We’re not going to go gung-ho and leave ourselves exposed to the odd silly goal,” McMahon said. “That’s how we lose too many games – there’s got to be balance.”

Weston arrive having conceded four goals in each of their last three games – but a two-goal haul at home to Hemel Hempstead last Saturday at least showed signs of improvement.

The Somerset side, who have a burgeoning Academy scheme, have a squad containing numerous youth-team graduates plus young players plucked from local league and non-league sides. Experience comes in the form of midfielder and player coach Clayton Fortune, who was a teammate of McMahon’s at Leyton Orient, although Weston will be without towering defender and skipper Tom Jordan, who has been given time off for personal reasons.

Their main danger is midfielder Dayle Grubb, while Joe McLennan – who scored against the Fleet this time last year – has returned from Bath City this month only weeks after signing for them. Ex-Aldershot and Gillingham striker Tristan Plummer leads the line, while two Exeter City loanees – Jason Pope and Alex Byrne – have also been drafted in. It was another Exeter loanee – Ollie Watkins – who scored the surprise winner in Jamie Day’s first game in charge last December.

Ed Miller has been Ebbsfleet United's communications manager and programme editor since 2014 and responsible for the club website since 2007. Contact him on ed.miller@eufc.co.uk
PrevPreviousAcademy side in warm-up win
NextFleet fire quenched by floodlight failureNext