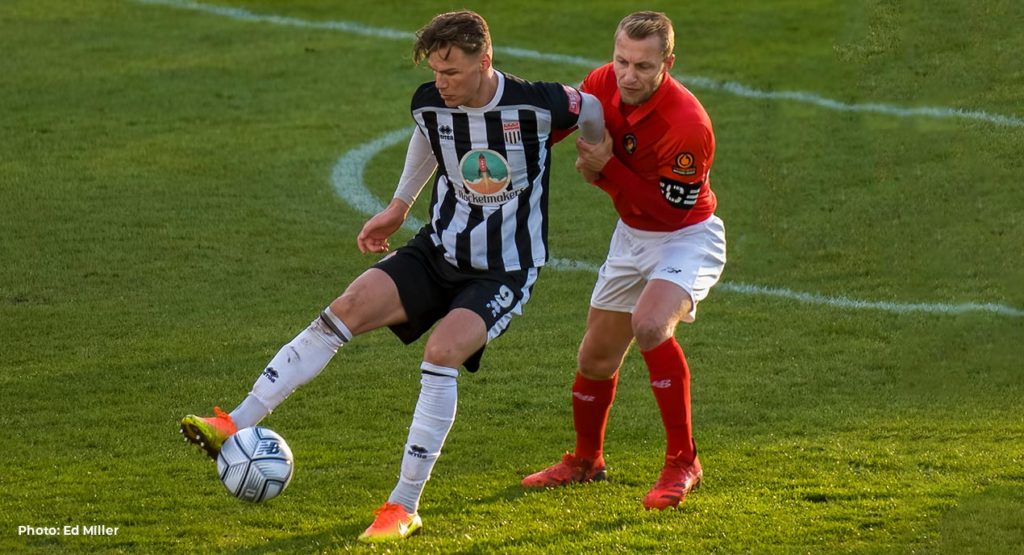 Solly “loving every minute” of it

Chris Solly helped Fleet to successive clean sheets and said how much he’s enjoying the current season, having added coaching responsibilities to his playing role.

“I’m enjoying it,” said the former Charlton defender after the Fleet’s win at Bath. “I’ve got a decent relationship now with the gaffer, Chris [Franks], Damian [Irvine]. It’s something that I’ve always had an eye on. Coming towards my late twenties, I was always looking at that sort of route and I’ve loved every minute of this season. Obviously I’ve still managed to play a lot of games and I’ll play as long as I can but having an eye on that side of things and working closely with the gaffer and learning a lot from him, is something that I’m really enjoying.

“I’ve had a few roles [including captain] but like I said I’m just enjoying every minute of it. Once you’re 30 as well you start to become more aware of the days coming to an end and I probably appreciate it a bit more now.”

Solly switched back from the midfield role he had against Eastbourne to line up alongside Sefa Kahraman and Sido Jombati at Bath but either position suits him, he says.

“I’m happy to play wherever,” he said. “I enjoy any role from the back, I find it a lot easier to organise and talk because I can see the whole picture but today the boys, right from the front, put in a shift and it makes it a lot easier for us boys at the back.

“It was a good solid away performance. I think probably not the prettiest of games to watch but very solid, everyone put in a good shift starting from the front. Two good goals as well for us and I can’t really remember Louie having to make many saves.

“The way we play is obviously an expansive brand of football but we’ve probably tightened up slightly just to get back to the basics and doing what we were doing better earlier in the season. That’s been showing in the past two games with two good clean sheets and that was the same last week. So we’re very pleased with that.”

The pitch might have created a few issues for the visitors, with the slope running from one flank to the other but Solly revealed the team had been prepared for that.

“We spoke about it before the game actually, on the pitch as we were warming up, and I said if I win the toss we’ll spin it, get that first 45 out of the way [uphill], stay in the game and then second-half shoot down here and have a lot more of the ball. We went in at half-time 1-0 and it’s always nice to get that early goal, it changes the way of the game. And in the second half we were fairly comfortable, got that second goal and then we looked solid after that.

“[The first goal], I think there was a shot and then a hand ball but then it just dropped to Chaps and he finished it really well. But the ref did say to be fair to him that he would give a pen if it didn’t go in. And to be honest you know, it’s nice to mention him because I thought the ref was very good today, probably the best we’ve had this season and so give him a shoutout!”

And Solly left the final word to praise the Fleet fans, who made a 300-mile round journey to see their side bag the points.

“There’s quite a few to be fair today,” he said. “I was a little bit surprised because this is a horrible journey but they supported us, the fans are brilliant and the three points makes that four-hour journey now a lot easier!”