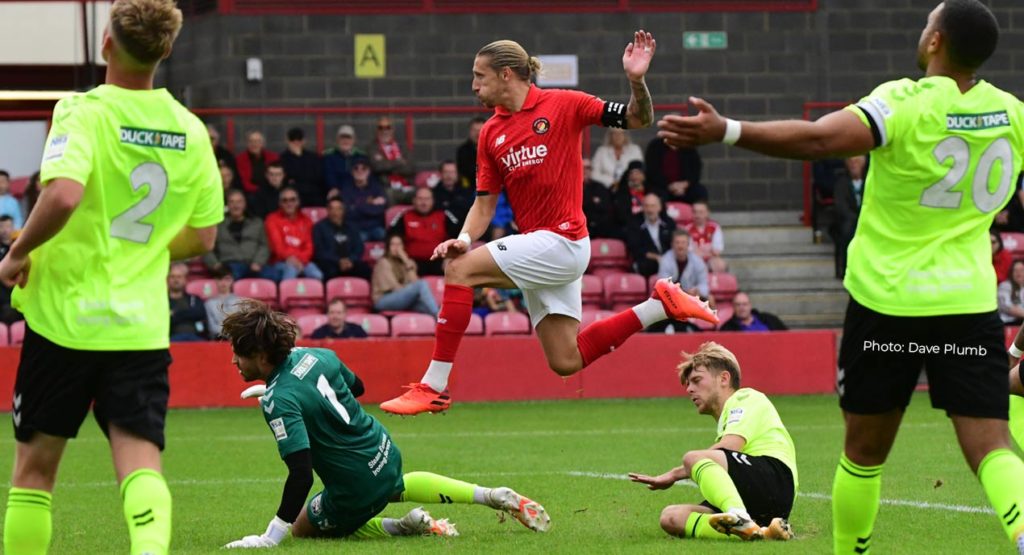 Skipper sees teammates blossoming around him

Fleet captain Lee Martin grabbed a goal and an assist on his return to action and praised his manager’s recruitment and the way he’s developed existing players, with Alfie Egan, Greg Cundle and Craig Tanner all namechecked.

“He’s a traditional European manager,” Martin said of Dennis Kutrieb. “They play the right way, something that I love, something that I probably missed out on throughout my career. I was at teams where maybe they played too many long balls and that wasn’t to my strengths so I’m loving it, I’m enjoying it and the boys have bought into it.

“You’ve seen some players blossom, just looking down there, Alfie [Egan], he’s kicked on to the next level now under him. Greg’s had a tough time with football and he’s a player with excellent ability. I can’t speak any more highly of him, I think he’s a brilliant person and a fantastic footballer. He’s been given his chance and rightly so. I’m chuffed for him and I think we’ll see a lot more of that, he’ll blossom too.

“It’s easy to play in because good footballers see space and awareness,” Martin continued. “You saw Tanner today. Since he’s come he’s been a joy to work with. Some of the time he takes that load off me, trying to get into the little pockets, he naturally drifts into them and then I can make the runs off the ball. So you’re seeing a different dimension and one that’s looked at the minute very fluid.

“I think we’ll be hard to beat when we play like that. That’s down to the manager’s recruitment, getting in the players he wanted to get in, footballers with technical ability. We keep working hard, we listen to the manager, he’s got a lot of ideas. It’s a great bunch here, I know a lot of the boys from Gillingham and a few of the other boys I’ve worked with before. It’s good now I’ve got more senior boys in with Joe Martin and Chris Solly.”

Martin’s delayed start to the season came as a result of his suspension carried over from last season’s sending-off at Havant & Waterlooville and the skipper had to sit in some frustration as his teammates turned it on for the campaign opener.

“It was disappointing I didn’t play in the first game,” said Martin. “Considering [last season] was null and void I’m not sure how the suspension ran through but it is what it is. It’s been frustrating for me watching the boys put on a victory against Tonbridge and today they were excellent again so we’re in a good place but we have to keep moving. [That game’s] gone now.

“I said to one of the fans, you’re going to have to stick with us at times, it’s not going to be plain sailing. There’s going to be teams that sit in and nullify us and then it’s down to us to create and try and break them down. You saw that it took a while to get the chances in but in the last stage of the game I think our fitness told and we’ve got three points.

“Obviously we’re going to keep looking at ways we can improve and keep building. It’s going to be tough, there’s good teams who play different to us. So we have to be strong, we have to adapt our game and we know that’s going to be difficult. But when those games come, we’ll work on different tactics with the manager and we’ll come up with a solution.”

Ed Miller has been Ebbsfleet United's communications manager and programme editor since 2014 and responsible for the club website since 2007. Contact him on ed.miller@eufc.co.uk
PrevPreviousBank Holiday turnaround leaves Kutrieb no pause for celebration
NextMatch highlights: Hemel Hempstead TownNext