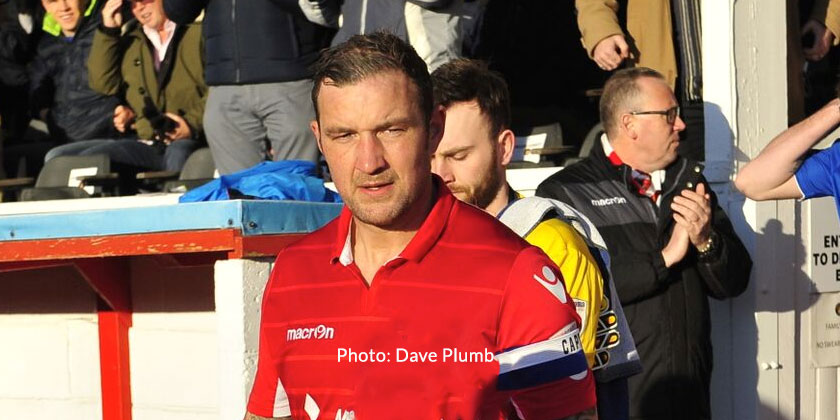 The Fleet boss said he was hoping the club captain would be able to be seen this week and then he would know more about the extent of the injury.

“It looks like a double fracture,” McMahon told FleetOnline, “and will need an operation. It’s a big blow so we’re hoping to get him in Thursday morning for surgery and we’ll see where we are after that.”

Kedwell sustained the injury seven minutes into the second half at Truro and it was in a fairly innocuous challenge according to the Fleet boss: “It was a freak one, just a collision,” he said. “The pitch was pretty hard and he got tangled up in a tackle from behind and the Truro lad rolled over his arm while it was on the floor.”

And the manager was unable to put an exact date on Kedwell’s return and whether he would have any further part to play in the season.

“It depends, we’re desperate to get him back, he’s desperate to get back out there. If there’s any way we can get him out there, we will. But we’ve got to look after him first and foremost. It’s a big blow losing him ahead of important games, and more so because he’s our captain as well.”

With Charlie Sheringham’s loan at Hemel lasting until the end of the season, Fleet will depend on Bradley Bubb and Darren McQueen, the two strikers having netted 31 goals between them this season. But in support of them will be Aaron McLean, who returned to full training this week, and McMahon is hopeful of easing him back in.

“Aaron’s got through full training for the first time and hopefully, depending how he feels, we’ll look at how he reacts and we can get a couple more days training out of him,” the Fleet boss said.

“Then we’ll assess it. He’s been out six or seven months, we can’t expect him to walk back into the building, pick up where he left off and be the player he was instantly. He needs a bit of time but obviously we need to maximise him when we can with Keds out of the picture. But not put too much on his shoulders – so whether that means 20 minutes here and 20 minutes there until he can go full pelt and be as good as we know he can be, so be it.”

Ed Miller has been Ebbsfleet United's communications manager and programme editor since 2014 and responsible for the club website since 2007. Contact him on ed.miller@eufc.co.uk
PrevPreviousTruro City 1-1 Fleet
NextMinute’s applause to remember PilksNext