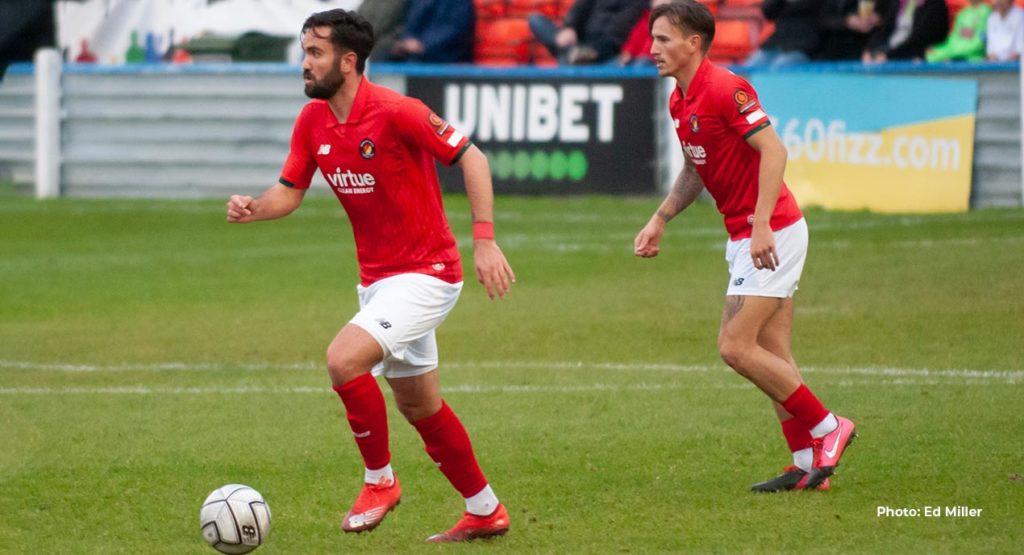 For Sefa Kahraman, yesterday’s first goal in English football was a major and welcome milestone as he settles into a second season in the Vanarama National League South.

Few probably appreciate what a huge move the relocation from Berlin to North Kent was for the 24-year-old, particularly given the unpredictability of a pandemic that was still far from over when he agreed a deal with the Fleet.

And yet Kahraman, like so many of his teammates, has thrown himself into the Fleet cause and plays football the way his manager wants to play. Now the defender has got off the mark to add to the goals he scored in Germany, seven of them for Tennis Borussia Berlin including this one particularly eye-catching effort!

Initially, it was difficult to tell who had got the last touch on the corner for yesterday’s goal but Kahraman was swift to claim it after he forced it beyond goalkeeper Luke Cairney, putting Fleet back in front and on their way to three points.

“Luckily I was in the right position,” said Kahraman, “and it was a great delivery from Tanner and all I had to do was tap it in and that was it. I was delighted, especially as it’s my first goal and I’m really happy about it – but I’m more happy about the three points.”

For all his goal heroics (plus the clearance that set Dominic Poleon off for the third goal), Kahraman’s main job is to stop them going in at the other end and in the seven-goal thriller that ensued, the Fleet defender had to put himself on the line to stop Hungerford’s comeback.

“We knew that it would be a crazy game and a hard game for us,” he said. “The gaffer prepared us really well and especially then in the second half it was a crazy game. I think for the fans as well, they they felt it and they knew it! But even games like these, it’s really nice to win and for us it counts just as three points. At the end we don’t care if you win 4-1 or 4-3, the three points are really important to you. I think it was a great effort and a great shift from the boys and we are lucky we defended in the right way.

“I think it’s too early to speak about the [league] position but we try to think game to game and try to get as many three points as possible.”

Settling into English football and the different teams and styles of play has all been part of Kahraman’s learning curve with the Fleet, but he’s clearly loving his time at the Kuflink Stadium having taken each game in his stride – culminating in last weekend’s man of the match display at Leyton Orient and he’s in the top three once more following yesterday’s win.

“Last year was my first year and there was some hard times for me but now I have adapted to the life, the boys take me [under their wing] really well and into the life. I’ve enjoyed it really well, it’s so [much] better than I expected! I’m sure in what I do and we will do it better in the next games.”

Ed Miller has been Ebbsfleet United's communications manager and programme editor since 2014 and responsible for the club website since 2007. Contact him on ed.miller@eufc.co.uk
PrevPrevious“That was a big win after Cup exit,” says Fleet boss
NextA Cray away day for Trophy!Next