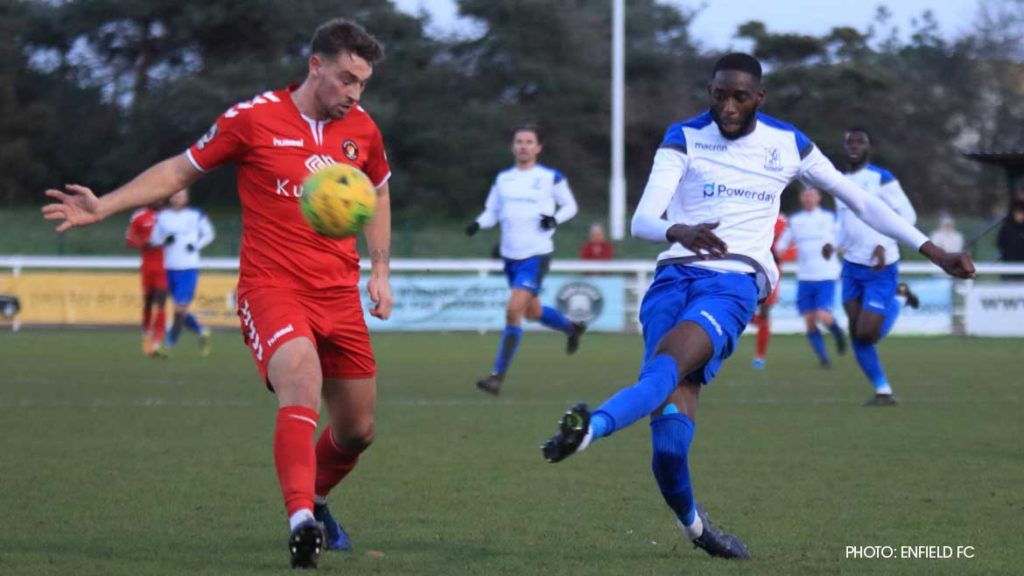 Despite a couple of setbacks in November, the month had ended on a high with the home win over Wrexham and the battle for survival not at all insurmountable given the relatively small points gap amongst the bottom clubs.

A visit to Eastleigh was first up on Fleet’s Advent calendar with the Spitfires looking to push on into a play-off position but without too much conviction given they’d lost in the midweek to our rivals for the drop, Wrexham.

With a decent track record in Hampshire in recent seasons, Fleet got off to a flier, Alfie Egan and Alex Reid creating the opportunity and in-form Myles Weston firing home as early as the fourth minute. Eastleigh’s equaliser before half-time owed much to Tyrone Barnett’s suspiciously offside run in behind the Fleet defence. Reid struck a lob off the crossbar in the second-half but the visitors had even better chances to win it. First, substitute Josh Umerah took the initiative moments after coming on to win a penalty, only to see his effort fired high over the crossbar.

Frustration turned to anguish four minutes from time when Egan earned Fleet a second penalty. With 11 successful kicks out of 11 for Bromley the previous season, you’d have put your house on Frankie Sutherland to score but this penalty, too, wasn’t converted as Max Stryjek made the save.

“No-one would complain if we’d won that game 3-1 or 4-1,” said Kevin Watson afterwards. “Nobody misses penalties on purpose, but I thought [the first one] was a bad decision. We only have ourselves to blame for not winning the game in what was a very good display.”

A break from the league came in the form of a potential banana skin away at Enfield Town but Reid got the Fleet off the mark inside the first minute, Gozie Ugwu soon added a second and Jordan Holmes then enhanced his knack for saving penalties by keeping out Billy Bricknell’s effort in a busy first-half – followed by an almost pedestrian second period.

The home return against Woking was rained off just before Christmas which left the Fleet with just the festive games to see out December, with some supporters eyeing a four to six-point return from the D-Days v Dagenham and Dover.

Alas, that return was only a single point, despite the good news of a comeback for long-term casualty John Goddard. Reid’s rapid instincts got Fleet off the mark after an hour in rainy conditions in Essex, many of the travelling fans quietly pleased that new Dagenham signing Sam Deering was forced to sit it out with injury. With the Daggers down to 10 men shortly afterwards when Mitch Brundle was dismissed for a lunge on Sutherland, the three points were in sight… but the home side finished very strongly and Chike Kandi’s late equaliser might easily have been the first of two goals but the points were shared.

That put added emphasis on a win at home against Dover to end the decade but the Whites had other ideas. Ahead through Michael Woods on 15 minutes, Andy Hessenthaler’s play-off chasers kept Fleet at bay despite a strong second-half performance from the home side. The cause wasn’t helped when Myles Weston limped out of the action and that would be the last Fleet fans would see of a player who had really risen to the occasion under tough circumstances.

“It’s our own fault for getting in the positions we do and not being ruthless enough,” said Watson in the post-match analysis. “It’s the first game we’ve not scored in since I’ve been here and I fully expected us in the second half to score but it wasn’t to be and it’s another game down.”

It was a month that produced just the two points and yet supporters were left with a feeling it could have been a whole lot more in the battle for survival as the year faded out.

HIGHLIGHT OF THE MONTH: The Enfield game was the only win of a light schedule in December – and Alex Reid’s opener after 53 seconds was certainly the best bit of that game.

LOW POINT OF THE MONTH: A Kent derby defeat to end the year was certainly a low, but the loss of Myles Weston to injury made it feel even lower as recruitment and loanee retention became uppermost in Kevin Watson’s mind.

THE STATE OF PLAY: That familiar position of 23rd saw Fleet above Chorley and behind Chesterfield and Wrexham. Sutton had begun to pull away from danger and it left AFC Fylde, Aldershot Town and fast-sinking Dagenham and Maidenhead hovering above the drop zone. Of greater worry to the Fleet by now was a gap of six points to safety – or five if you counted 21st position as the safety rung because of the Bury FC situation.

Ed Miller has been Ebbsfleet United's communications manager and programme editor since 2014 and responsible for the club website since 2007. Contact him on ed.miller@eufc.co.uk
PrevPreviousSeason Review Part 5: November
NextSeason Review Part 7: JanuaryNext