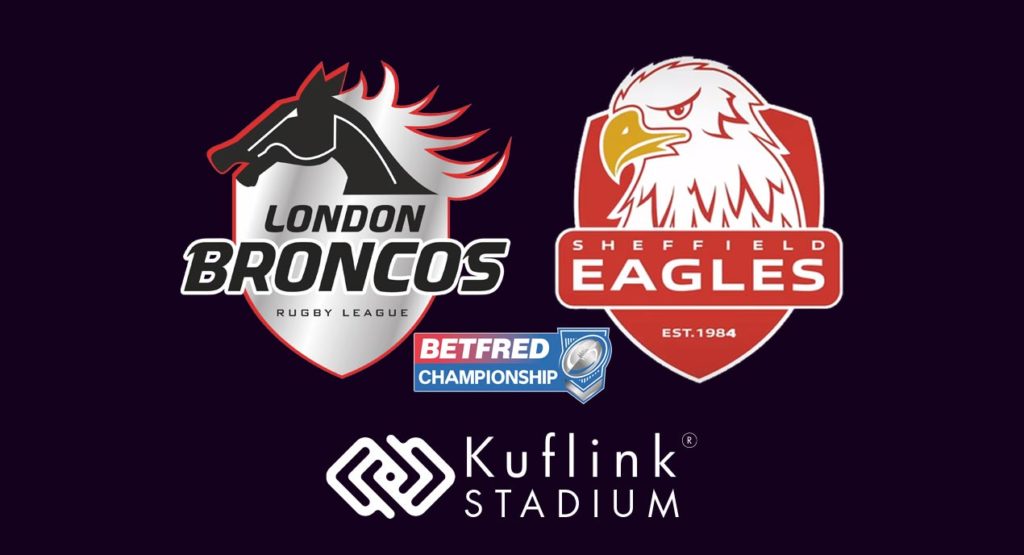 The Kuflink Stadium will break new ground in the summer when we host rugby league here on July 3rd. London Broncos come to town on that day to play a Betfred Championship fixture against Sheffield Eagles.

The decision has been made to accommodate essential pitch maintenance work at the Cherry Red Records Stadium – where the Broncos usually play their games.

The Kuflink Stadium hosting of the match is part of the Broncos’ plans to play one game annually in Kent. It is hoped the move will inspire more people in the south-east of England to engage with Rugby League and make it their sport of choice.

With our location within half-a-mile of Ebbsfleet International, Northfleet and Swanscombe train stations and with road access from central London and Kent via the A2, the Kuflink Stadium is ideally situated for fans from the capital. We also have a 200-capacity hospitality lounge for Broncos fans who want the VIP experience.

Ebbsfleet United CEO Damian Irvine said, “We are delighted to host such a high-profile fixture here at the Kuflink Stadium and expand what we usually offer to fans of other sports in our locality and the wider south-east region. It comes at an ideal time in our football close season and it’s another feather in the cap for the Kuflink Stadium and our club to generate non-football revenue. We’d love for Ebbsfleet fans and locals around our borough to join Broncos, Sheffield and neutral Rugby League fans for a first at this historic ground.

“It’s been a very fruitful arrangement with the Broncos to play their first game in Kent with us and we very much look forward to hosting them and Sheffield Eagles at our home stadium.”

Jason Loubser, London Broncos CEO, said: “We’re really grateful to Ebbsfleet United FC for allowing us to use their stadium in July for our Betfred Championship fixture against Sheffield.

“It’s a great venue for us to use while essential grounds work is carried out at the Cherry Red Records Stadium which will enable ourselves and partners AFC Wimbledon to play on the best possible surface in the year ahead.

“It’s always been our ambition to grow Rugby League across the region, and we hope our plans to host a one-off match each season in Kent can accelerate us fulfilling this objective.

“We understand easy access to the game is key for our core fanbase. It’s why Ebbsfleet United’s ground offers the perfect solution due to its close proximity to the A2 and train stations which serve central London in 18 minutes.

“We hope to see as many Broncos fans there on the day – and hopefully we can expose our club to a new audience in the south-east.”

General admission ticket prices for the game will £15 for adults, £12 for concessions and just £1 for U16s. Hospitality will be priced at £35 for the game which will include a one-course meal.

General admission and hospitality tickets will go on sale at 10am on Tuesday 17 May and can be purchased via London Broncos website at www.londonbroncosrl.com

Ed Miller has been Ebbsfleet United's communications manager and programme editor since 2014 and responsible for the club website since 2007. Contact him on ed.miller@eufc.co.uk
PrevPreviousKieran’s running with the Reds once more
NextWright of passage as Fleet land new midfield manNext