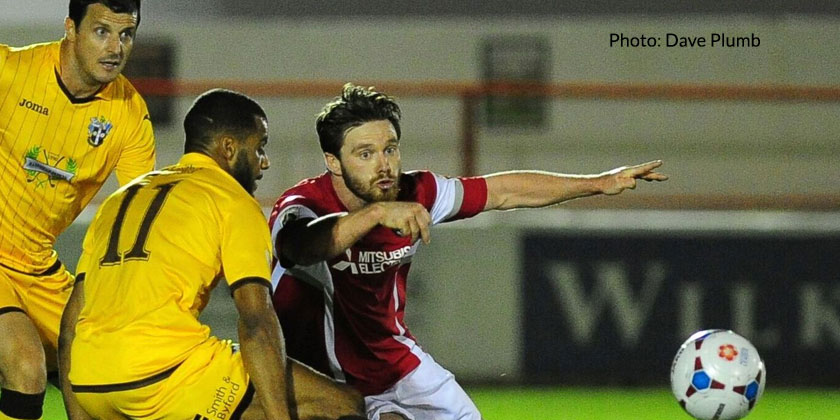 Whoever compiled the Vanarama National League South’s fixtures last summer is probably giving themselves a well-deserved pat on the back for pencilling in tomorrow’s crunch match for the last weeks of the 2015/16 season. Make no mistake, as far as Fleet are concerned this is a mammoth fixture to rival the Canvey Island clash of 14 years ago, or the promotion final at Farnborough in 2011.

And for Sutton, perhaps there’s even more riding on it. Victory for Paul Doswell’s side would  all but confirm the title for them (barring a frankly unlikely, some might say freak set of results in the last fortnight) – some feat given they only took over the top spot in midweek.

Fleet have led the division for more than seven months but the season has boiled down to one simple equation – win or bust. A draw would be beneficial to Sutton, too, given their game in hand and superior goal difference while even a Fleet win doesn’t wrestle the advantage back in our favour… unless, of course, the potential for a points deduction for the new league leaders is realised.

That will be far away in the minds of both sets of players, however, who will be eager to prove their supremacy come 4.45pm on Saturday. For all the talk of Sutton’s unbeaten run and Fleet’s dropped points in 2016, both sides’ form – albeit at different points of the season – has provided justification enough for both to be contesting the league title.

Fleet could travel with anything from 700 to 1,000 supporters on Saturday with eight coaches now booked and plenty of fans making their way by rail and road. Sutton have issued their own rallying call to supporters who have boosted their crowds into four-figures in recent games.

Having gone 23 games unbeaten and broken the division record in the process (while they could well also break the attendance record on Saturday), Sutton are clearly firing on all cylinders, having steadfastly refused to drop points in their pursuit of Fleet’s previous lead at the top of the league. But Daryl McMahon is preferring to concentrate on his own side’s record, which may not have made as many headlines in recent weeks but is nonetheless up there with many of the league champions of recent seasons.

It is that statistic that the Fleet boss will impress upon his players who have responded positively to a disappointing Easter weekend by thrashing Hayes & Yeading and executing a superb turnaround against Chelmsford City last weekend. In Matt Godden, Fleet have the league’s in-form striker while Sean Shields’ performances from the wing have added another dimension to the team’s attack.

Dean Rance is suspended for the next two games having picked up 10 yellow cards but Fleet welcome back a full-strength defence with Anthony Acheampong and Kenny Clark reporting in fit. Having been unchanged for two games, it would be a surprise to see any major shift in the team line-up, and without the option of Rance’s robustness away from home, McMahon is likely to keep faith with his “ball players” on the 3G surface.

Sutton are expected to welcome back former Fleet loanee Craig McAllister up front, while defender Simon Downer is also fit. Midfielders Bedsente Gomis and Ryan Burge are unlikely to feature, however, as is the dangerous Dan Wishart (suspended). Fleet won’t be sorry that Gomis is out as he was the player who picked apart Jamie Day’s new-look side in the corresponding fixture last season while Wishart scored a winner for Hayes & Yeading at Stonebridge Road in 2014/15.

The home side have several big threats, with striker Dan Fitchett dangerous, while former Arsenal man Craig Eastmond and ex-Middlesbrough and Charlton midfielder Nicky Bailey will be looking to give their side supremacy in the core battle against Stuart Lewis and John Paul Kissock.

Sutton have kept seven clean sheets from their last 10 games, while both sides boast the division’s meanest defences, having conceded just 32 goals each, and in a game with so much riding on it, a single goal could be just enough – as it was at Stonebridge Road in the reverse fixture. It was Jordan Parkes who got that winner and the Fleet midfielder has a decent personal record against Sutton, though his side also had to rely on a late penalty save from Brandon Hall to take the three points in that game.

Sutton are seeking a return to the top flight of non-league football for the first time since 2000, when they enjoyed a single-season stay to add to a five-year tenure in the late Eighties and early Nineties. Fleet enjoy a 9-3 margin of victories in our head-to-head clashes but Sutton haven’t lost to us at Gander Green Lane since our title-winning season of 2001/02. If that’s an omen for reversing that record this Saturday, Fleet fans will gladly take it.

Ed Miller has been Ebbsfleet United's communications manager and programme editor since 2014 and responsible for the club website since 2007. Contact him on ed.miller@eufc.co.uk
PrevPreviousTaking a Gander at previous form
NextView video of Dean Pooley’s Burma challengeNext