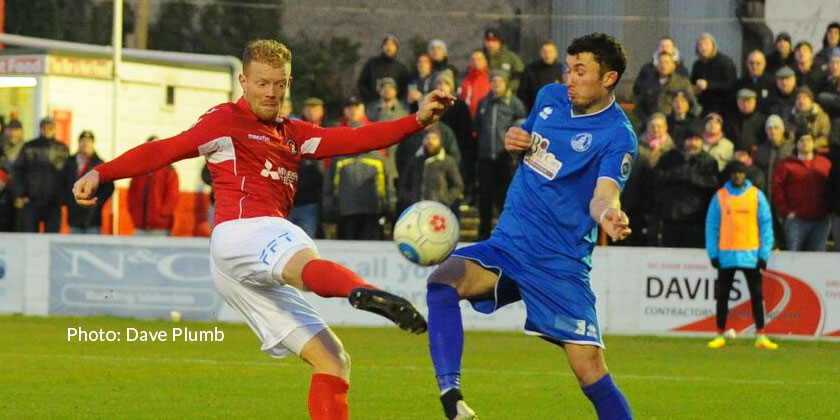 Red and blue corners knuckle down for the knockout blow

“Play-offs” have been words to send a shiver down the spine of every Fleet and Chelmsford fan over the past few years. From a triumphant first attempt to two heartbreaking final defeats on their own ground, Ebbsfleet supporters have witnessed the highs and lows of the proverbial football “lottery”. For their opponents, unsuccessful in every single play-off semi-final they have contested until last Sunday, there’s an equal trail of agony in their wake. Something has to change for one club on Saturday; for the other, the agony goes on.

In the red corner, the Fleet in their third home final in four years. In the blue corner, wearing their away colours, Chelmsford contest their first ever final after losing in six previous play-off campaigns.

Yet another full-to-capacity Stonebridge Road crowd will be there and for the Fleet it’s a case of having seen it all before. Technically, there should be few nerves and fewer surprises amongst a squad with personnel that has contested numerous play-offs at this and higher levels. Ashmore, Clark, Cook, Deering, Rance and Shields have all been through play-off finals at this level, while Drury, Kedwell, McCoy, McLean, Phillips and Winfield can boast of promotions higher up the footballing ladder.

But as Jack Powell – who played in the Championship only two years ago – said in midweek, the promotion stakes are so very high and it’s “now” that matters, not what players have done in previous seasons.

Certainly Fleet boss Daryl McMahon is focused on “now”. Asking him whether he wants to erase last season’s memories is barking up the wrong tree. The manager believes that game is history, has no bearing on this final and that far from erasing last season’s memories, he only wants to create good ones this season.

McMahon has always been content to take one game at a time and now the time has arrived where one game is all that matters and will secure the club’s destiny one way or the other. “After months of chasing the top spot,” he said, “our destiny is now firmly in our own hands and it comes down to one game to realise that.”

Since the turn of the year, his side are certainly playing football that suggests they have been in control of that destiny for some time. “The players have gone out there and entertained,” McMahon said. “That has been the DNA of what I try to do, which is to play attacking football and score goals.”

That will be the message to his players this weekend. Go out, play football as you have been doing, and reap the rewards. With the Fleet unbeaten since Boxing Day in the league, and having lost just one game at Stonebridge Road all season in all competitions, the manager and players are rightly confident that they are in a better position going into this final than in either of the last two attempts.

To have lost Danny Kedwell and Bradley Bubb at this stage of the season might have broken other squads but Fleet have a habit of finding the goals from the front, middle and back – and with Kedwell’s heroic and frankly unlikely return from a broken arm, the skipper may well have the opportunity to stamp his influence on the final after the events of last year.

As ever, the instruction to both sets of players will be to play the game and not the occasion. Indeed for the Fleet, the lack of a Kent final, especially with Dartford just falling at the last hurdle, has been said by some observers to have taken a little of the emotion out of this game. But once that whistle goes at 3pm, a lack of emotion certainly won’t be the case.

Standing in the way of the Fleet, however, is the small matter of a Chelmsford City team led by Rod Stringer, always a canny operator and not one to shy away from a challenge such as this. Having taken Braintree to the league title in the same season that Fleet last conquered the play-offs, Stringer will be playing the “underdog” card to the fullest to take some pressure off and yet get the most out of his players at the same time.

The Clarets are the third highest scorers in the league and Stringer hasn’t been afraid to pack his squad with attacking talent. Having lost Shamir Mullings and Billy Bricknell part way through the season, he’s managed to replace them with the likes of Chris Dickson, Louie Theophanous and Elliott Buchanan who, together with 21-goal Shaun Jeffers, have continued to find the net with alarming regularity.

Behind them lies the creativity of Robbie Willmott, Bagasan Graham and Kane Haysman alongside a steely central midfield, plus an aerial threat from set pieces amongst the big defenders at City’s disposal. Fleet will have to withstand a real physical challenge and McMahon has no doubt warned his side that they’re in for a scrap.

It is likely to be an intriguing battle of tactics, with Fleet’s favoured 3-5-2 during the early part of the season having given way to a 4-4-2 that by and large has provided a better balance. City often line up with three big strikers, two tough midfielders and three big centre backs, with wing backs raiding the flanks, but Stringer has mixed it up several times this season and he has options within the squad to do just that and spring a surprise on Saturday.

Certainly the first-half display of his side in their win way back in September showed those attacking qualities to their fullest while Fleet nullified those and got the better of things in our 2-0 return win at Stonebridge Road – though some Chelmsford observers have pointed out they were in something of a transitional phase in that late January period.

City have lost three league games this year, to ourselves, to Maidenhead and most recently at Oxford City, so they come into this final in decent form of their own.

Stringer told the Essex Chronicle, “We know we’re going to have to put in a real special shift and performance to get anywhere close to what we’re going to have to face [against Ebbsfleet]. I love an underdog. On the day it’s cup football, it’s about who holds their nerve and so on. I can’t wait to see them, let’s get this game on. One of us has got to lose.

“We’ve been where we’ve been, had a great season in more ways than one, had a lot of off the pitch problems, but we’re fighting through them and this club’s on the front foot at the moment. We’ve played Ebbsfleet twice, they beat us at their place and we beat them at home, we’ll learn a lot from that game over there.”

It may come as some comfort to Fleet fans that the two clubs’ recent habit of winning on each other’s territory has eased off of late. Fleet are unbeaten against Chelmsford in the last two Stonebridge Road clashes. However, City can call on the spirited performance that saw them win at Stonebridge Road against a then all-conquering Fleet in last season’s FA Cup to become the first side to inflict defeat on Daryl McMahon as a manager. In another quirk of fate, McMahon’s first game back as boss at Stonebridge Road was against none other than Rod Stringer in a 4-0 win over Bishop’s Stortford. How he’d love to come full circle and make it his last in the National League South.

Rivalry with Chelmsford goes right back to our first season in existence in 1946/47 but none of the 90 clashes since have come anywhere as close in importance as this final.

In 1988/89, the two clubs won promotion and were rivals for the Southern Division title, but City strolled to that one in the end and beat Fleet twice that season, winning 3-0 at home and 2-0 away.

And, of course, the 2010/11 play-off semi-finals also saw high stakes, when a virtuoso performance by Fleet in Essex earned a 4-1 away win, with a 2-1 advantage in the second leg comfortable enough to see us through. The only survivor from that clash is City defender Mark Haines.

There’s not much to choose between the two clubs’ down the last 70 years either, with Fleet having won 37 to Chelmsford’s 36 victories and 17 draws. How the Clarets would love to balance up their win column on this occasion.

But at the end of it all, this is words and statistics and ultimately meaningless. The countdown begins now until 3pm on Saturday when the talking stops, the singing begins and the players get set to write their names into the histories of their respective clubs.

COME ON YOU REDS!!

Please use Ebbsfleet International C, £3 (please have correct change to hand). We recommend not parking on Thames Way as it is a designated clear way and regularly enforced. Please take extra care not to obstruct local residents and businesses. Anyone who has an EUFC club car park season ticket, please note it is not valid for play-off games.

Please use the ticket gate at the Swanscombe End, situated 150 yards to the left of the home turnstiles (past stadium construction hoardings).

Ed Miller has been Ebbsfleet United's communications manager and programme editor since 2014 and responsible for the club website since 2007. Contact him on ed.miller@eufc.co.uk
PrevPreviousCity planning: who are the men aiming to break Fleet hearts?
NextCouncil to hear stand planning applicationNext