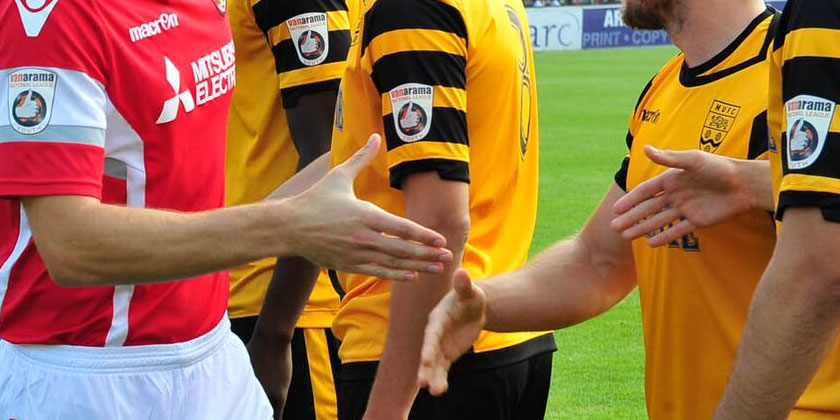 Red and amber clash under the lights

As eagerly awaited and keenly contested now as they ever were in the late Seventies and early Eighties, Fleet-Maidstone games are once again a fixture of the Kent calendar. And, as in 2015/16 when the Gallagher Stadium hosted the first big derby of the modern era, this latest one arrives early in the season with both sides having barely caught their breath after Saturday’s starting gun was fired.

The watching media doesn’t have to rustle up a script as this fixture produces its own talking points. Fleet drew first blood with that 2-0 win at the Gallagher but since then, Maidstone inflicted Daryl McMahon’s first league defeat as a manager in October 2015 and, of course, triumphed on penalties in the small matter of 2016’s promotion final to bypass Fleet en route to the National League.

Everything from Danny Kedwell’s penalty kick, to Lee Worgan’s promotion-winning save, through Stuart Lewis’s exchange of clubs and the inevitable taunts and put-downs the two sets of fans will indulge in, it’s all there to make this the first truly intense fixture in non-league this season. It’s probably just as well that the two clubs are led by such mild-mannered managers, with neither Daryl McMahon or Jay Saunders likely to engage in any mud-slinging. Both bosses are young and appear to have a mutual respect, while many Fleet fans still regard the affable Saunders as one of their standout midfielders from a previous spell at this level.

Whether such grace and diplomacy extends to the pitch, however, remains to be seen. Quite apart from having a significant job to do to rein in Fleet’s midfield, Lewis will no doubt be keen to put on a show on his former patch as the two clubs who voted him player of the year in the past two seasons slug it out around him. And in a red shirt, Kedwell may have exorcised the demons of 2016 by playing a key role in 2017’s promotion, but he’d also no doubt like to have the latest laugh against his former club where he turned out as a 20-year-old.

Publicly, neither McMahon or Saunders will make much reference to the 2016 final and in truth, except where the fans are concerned, it is now largely irrelevant, with both clubs back on a level playing field after a year. Both men will instead be keen to notch their first win of the season with their sides having looked good for three points on Saturday until pegged back late on.

Ter Horst, along with fellow striker Jamar Loza, is likely to miss out through injury, leaving much of Maidstone’s attacking burden on the highly rated Piggott – a former teammate of Myles Weston’s when the pair won promotion with Southend. Defender Okuonghae is also facing a battle to be fit in a Maidstone defence that was robbed of Kevin Lokko on the eve of the season, though Saunders has plugged that gap by bringing in Finney and Wynter late last week.

Fleet will be without the suspended Anthony Cook, while Jack Connors and Dean Rance sat out last Saturday with injuries.

For admission and car-parking details, please see this link.

There will be live Twitter updates via @EUFCofficial and BBC Radio Kent is providing full match commentary.

Ed Miller has been Ebbsfleet United's communications manager and programme editor since 2014 and responsible for the club website since 2007. Contact him on ed.miller@eufc.co.uk
PrevPreviousGet a Fit-Bit for a fitter Ebbsfleet
NextFleet 2-0 Maidstone UnitedNext