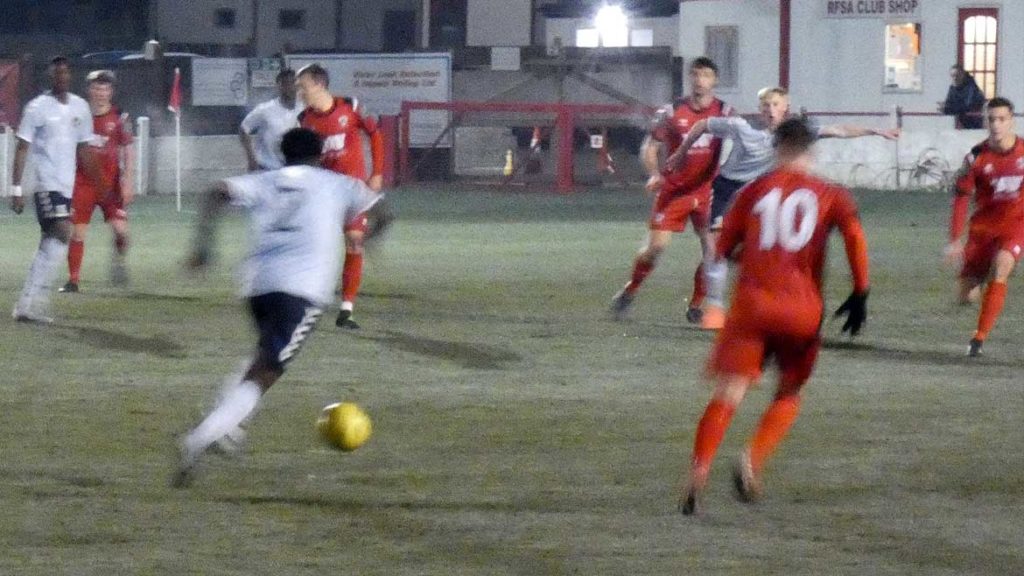 The final scoreline in this Kent Senior Cup Round Two tie was tough on the Fleet’s academy side who matched their opponents for a good 70 minutes and it was no surprise that all four goals came from the Rams’ subs’ bench, those changes turning the game in their favour.

With Danny Kedwell on Havant & Waterlooville duty, his fellow Academy manager Daniel Gill took charge and named two players who have stepped up to the first-team-squad – Zach Dainkeh and Mathew Achuba – in the starting XI.

Ramsgate fielded a largely first-team lineup, with 13 of their 16-strong squad having been involved in their previous league outing.

It was a tough ask for Fleet’s young and inexperienced side and Ramsgate initially looked the stronger, goalkeeper Harrison Firth pressed into a couple of saves inside the opening 15 minutes.

They should have opened the scoring on 16 minutes when Charlie Shonk made room down the right and whistled a low show across goal that had Firth at full stretch but it skipped just wide of the post.

But Fleet settled into their rhythm from the 20-minute mark and began to disrupt the home side whose management team were frustrated at their side’s lack of a breakthrough.

A strong run by Jordan Adetiba provided some forward momentum and on 27 minutes Jack Hardy raced on to a decent through ball to fire a shot at pace just wide. Three minutes later, Dainkeh let fly from 25 yards with a dipping effort that just cleared the bar.

Hardy chased down Ollie Gray’s hesitation on the ball but the Ramsgate defender recovered his poise just in time as Fleet enjoyed a good period in the ascendancy.

Ramsgate might have nicked a lead on the stroke of half-time, however, Achuba sliding in to deny Ashley Miller in the box before the same player rasped a shot on to the roof of the net.

The hosts emerged stronger in the second-half and Fleet couldn’t quite find the balls into their forward line they had managed in the first period. Shonk should have scored moments after the restart when he slid a shot beyond Firth that carried just past the foot of the far post.

Firth continued to keep his side in it with a string of good blocks and skipper Callum Ferris slid in to deny Anidugbe from 10 yards.

Fleet found it difficult to create too much, an Adetiba run from the left almost opening up the Rams defence and right at the end, substitute Emilio Regini-Moran whipping in a shot on target that goalkeeper Charlie Burns was fortunate to stop on the line.

In between those two chances, however, Ramsgate finally breached the Fleet defence on four occasions. But it took the substitute pairing of Nick Treadwell and Kane Rowland to do so.

The first came on 72 minutes, Rowland getting room to turn on the edge of the box and with Firth committed, he arrowed a shot into an empty net.

The second came seven minutes later when a corner was forced over the line by Treadwell. The Rams had another effort disallowed and a shot skimmed off a post before they doubled their lead in the final minutes.

It was tough on goalkeeper Firth who made a brilliant double save and then a third block moments later as time ticked down. But on 88 minutes, Rowland slid in to a cross from the right for his second and as the 90 minutes were up, debutant substitute Charlie Meade made the most of a tired Fleet defence to meet another delivery.

Ramsgate progress into the quarter-finals but they were pushed all the way by a brave young Fleet side.

Ed Miller has been Ebbsfleet United's communications manager and programme editor since 2014 and responsible for the club website since 2007. Contact him on ed.miller@eufc.co.uk
PrevPreviousIt’s time for Timlin
NextTrophy tickets available in advanceNext