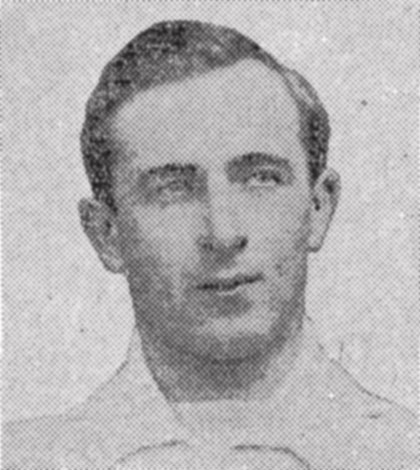 Gravesend United, like its local rival Northfleet, also lost players in the First World War. We remember two (though there were likely more) who paid the ultimate sacrifice

Firstly, there was Roland (sometimes quoted as Richard) Thorndike (pictured), who lived in Cliffe and was employed as a ‘domestic coachman’. Described by the South Eastern Gazette as “for two or three seasons a prominent member of the Gravesend United Football Club, on whose behalf he distinguished himself as a clever wing forward, being speedy and skilful, he always played a sporting game and for that reason was a general favourite”, he played in the Kent Senior Cup Final of 1913 against a Northfleet side that included fellow First World War casualty Edwin Myers.

A match report from the game, watched by more than 10,000 people, singled him out as “being responsible for some clever work, some good long grounders, putting players in a grand position and himself just missing the net by inches.”

Private Thorndike enlisted in Gravesend in the Royal Fusiliers. He was awarded the Military Medal for “conspicuous bravery in the field” on February 10-11, 1917, in an action near Thiepval on the Somme. His divisional commander noted, “I should like you to know that your gallant action is recognised, and how greatly it is appreciated.” His division’s war diary quoted the action in which Thorndike won his medal as follows: “On February 9th the battalion went into the line again for two days, and had a rather lively time, the artillery of both sides being active. On the night of the 10th, ‘A Company’ of the Fusiliers rushed and captured a German strong point.

“The Germans then concentrated machine-gun and trench-mortar fire on the little garrison. Both the officers and nearly all the NCOs became casualties, and in a strong counter attack the enemy regained the position. Several enlisted men exhibited considerable gallantry during the course of the night’s activities and recommendations for honours were submitted.”

However, Thorndike was not to survive the war. While on leave in March 1918, he married Emily Smith (pictured left) but just five weeks before the guns fells silent, he died of wounds, aged 27 – on October 3, 1918. He had been part of an attack on September 29/30 to support an American push to finally break the German Hindenburg Line. The Fusiliers reached their objective despite shelling and gas attacks, but one can only assume that Thorndike was wounded in the course of this action and died three days later as a result. He is buried at Tinecourt on the Somme and commemorated on the Cliffe war memorial.

Another to fall was Gravesend defender Private Albert Victor Hibbin. Having been placed on the Army Reserve in 1915, Albert – or ‘Mick’ as he was known – was mobilised at the Regimental Depot of the Queen’s Own (Royal West Kent Regiment), Maidstone, Kent on Tuesday 30 May 1916 and saw action on the third day of the Battle of the Somme. He was one of 9,000 men taken prisoner at the end of November 1917 during the Battle of Cambrai and died in German captivity of battle wounds on December 2, 1917. He was buried at Caudry, behind German lines. He was posthumously awarded the Military Medal at a ceremony at Tilbury Fort. A wartime news report of his death mentioned that he was “a man of splendid character and deportment, held in high regard by his old colleagues.”

He was born and raised in Denton and became assistant postman at Gravesend Post Office in 1908, also playing as a defender for Gravesend United around this time and leading up to the war. He died aged 30, survived by a son and his wife Elizabeth, who didn’t remarry, and she passed away in Gravesend in 1962. A memorial plaque in remembrance of Post Office staff, including Hibbin, who died during the Great War is located at the Gravesend Delivery Office in Milton Road.

Ed Miller has been Ebbsfleet United's communications manager and programme editor since 2014 and responsible for the club website since 2007. Contact him on ed.miller@eufc.co.uk
PrevPreviousL Cpl William Kennedy, 1890-1915
NextSurvivors: Charlie Buchan, Andy WilsonNext