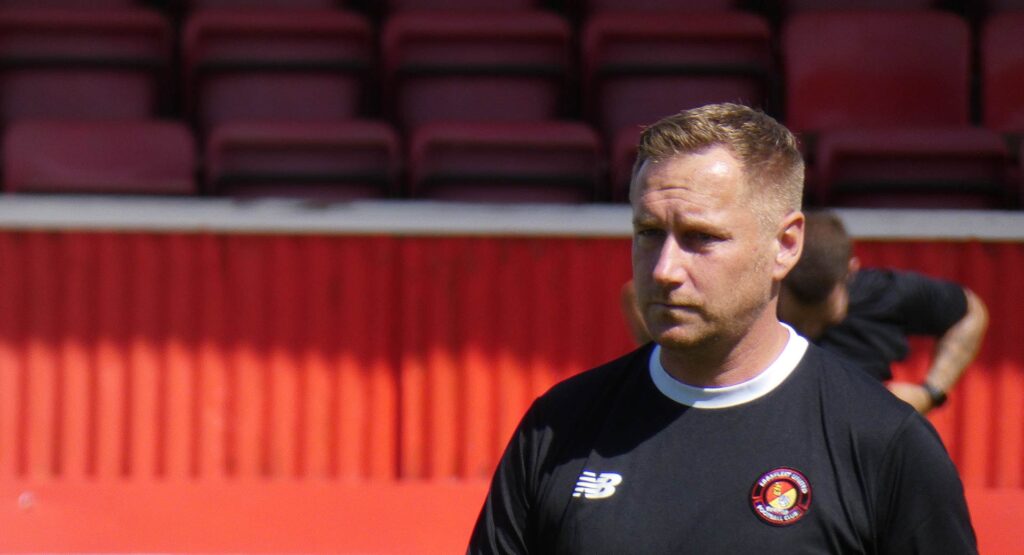 Ebbsfleet United’s playing squad have concluded their first week of pre-season training – a “really tough week” work-wise according to Dennis Kutrieb – who expressed his delight with the return to football, the club’s summer recruitment and the pre-season preparations he intends to use as a springboard to success.

The Fleet have taken the playing squad from zero to double figures in what seems no time at all – Jordan Holmes, the first man in the door, was re-signed on July 8th and since then Kutrieb has signed enough players to fill a starting eleven and bench.

“I’m very pleased [with the recruitment],” he told the club website in his latest video interview (above). “We’ve taken our time and it was a lot of work before we could start pre-season. The players want to give everything for the club and they understand what we want to do and that was a key point for us in our search. You need to be sure you have the right players on your side because you have to work with them all day long, all year.

“With 17 players, we could play tomorrow and I couldn’t say at this point who would be the starting eleven and that’s a very good situation.”

The player roster has increased in double-quick time with only a few positions to fill and the Fleet boss has the luxury of several weeks to fine-tune those.

“Seventeen is a good number at the moment,” he said. “We’re searching for a few more but not many more. There are good characters here with good attitudes who want to work hard and we now have to take care we get the right numbers for a full squad.

“Strikers like all other positions are very important but the wording in Germany for strikers and goalkeepers is ‘special persons’ so you need to find the right ones for the squad. We have lots of chats at the moment with strikers – two, three, four of them that could be the right ones – but we’ll take our time, make the right decisions. We’re in a good way and we’ll decide soon.”

The pre-season training programme, as outlined by head of performance Lee Taylor in his interview earlier this week has also proven to be a busy time for Kutrieb and his staff – and the Fleet boss has been thrilled by the work ethic he’s seen thus far.

“I’m very positive,” he said. “They want to work hard. It was a really tough week – they don’t talk, they work. For me as a manager, you are very proud. That’s the point we are at at the moment and I think we’re in a very good way.

“This is a tough league, it’s not easy to get through it – you have to work when you want to be successful and win games. Every weekend, when we have games, and on Tuesday nights – so we need very fit players who will give their best.”

Due to the Covid situation, Kutrieb has waited more than two months since his appointment to get his feet under the desk at the Kuflink Stadium and he’s eager to not just make himself feel at home, but his players too as he underscores the importance of his squad feeling ‘local’ to Stonebridge Road.

“It’s fantastic [to get on the pitch finally],” he said. “Everyone’s been waiting five months for it and it’s a really tough situation for every one of us. You can feel every player, everyone on the staff, everyone wants to be on the pitch so it’s a really nice feeling.

“We stay [and train] here at the Kuflink Stadium because we want to get that home feeling. Last season, the squad wasn’t often here, only for the games. I don’t care about the past but for me a very big point is that we stay here because it’s our home, we want to win games here and another big point is we have our fans here.

“So of course I care about the fans. They push the team, for the players it’s massive when they get supported and we need them. So I’m really proud to be here – because I come from outside, I don’t know anything about this club in the past but at the moment when we come together, the fans, the club, the doctor, all of us, I think we can build a massive team together. If we have success, then that’s for everybody.”

Ed Miller has been Ebbsfleet United's communications manager and programme editor since 2014 and responsible for the club website since 2007. Contact him on ed.miller@eufc.co.uk
PrevPreviousFranks in the frame as Fleet first-team coach
NextOn this day: August 22ndNext