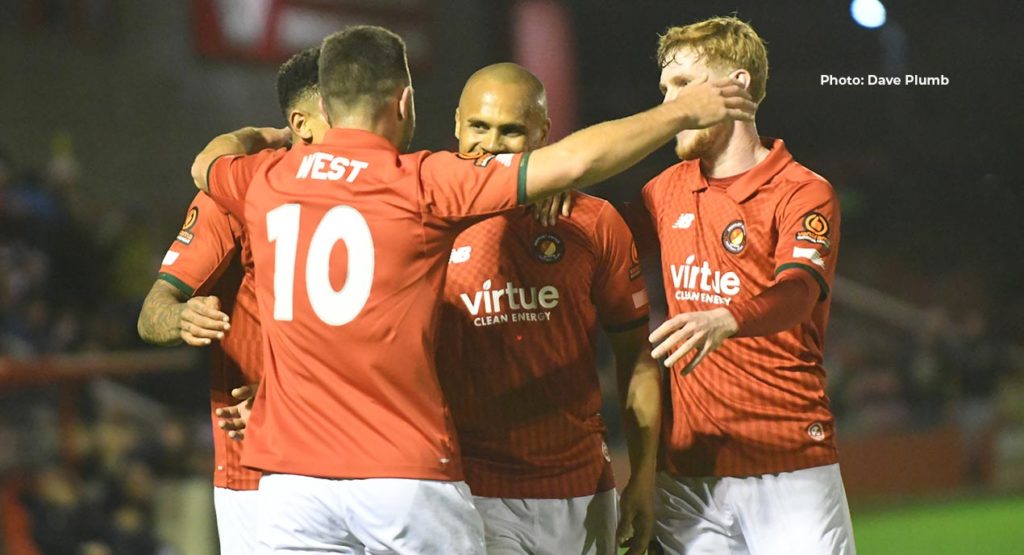 It’s 365 days since the Fleet and Dartford went head to head but 1,827 since the clubs’ fans got to do the same – under those circumstances, any derby match would be eagerly awaited. But throw in the two sides’ respective positions in the division and the potential that both could end up in the promotion shuffle come May and this match carries even greater resonance.

Of course, in terms of points weighting and the reward for a win, it’s exactly the same as any of the other 39 league games this season – but try telling anyone involved that it’s “just another game” and you’ll likely get short shrift.

Fleet’s previous team selection ahead of Tuesday’s goalless draw at home to Billericay practically picked itself, with Dennis Kutrieb having 16 players available but he expects that situation to have improved by the time Sunday’s derby rolls around.

“We can recover and prepare and at least we had five more days and we should look better in those five days,” he said. “We had just one day in training and we had to go again [against Billericay]. Now we have five more days but as always I’m positive. I’m looking forward to the Dartford game because it’s a great game with many fans, it’s a big derby. It’s a great game for everyone, for us, for Dartford and the fans – so let’s go for it.”

And Fleet midfielder Jack Paxman spoke on behalf of the home players when he told Kent Online, “This will be my first Ebbsfleet-Dartford derby with fans. I’ve played in a few other Kent derbies and they’re always really big occasions. This one in particular I’m really looking forward to with both teams being high up the table looking for promotion.

Fleet’s injury list this past few weeks has included Alex Finney, Joe Martin, Lee Martin and Kieran Monlouis, most of whom are nearing a return to action in the short-term. One face definitely back for Sunday is Tobi Adebayo-Rowling who has completed the three-match suspension for his red card at Oxford City.

In one of the tightest title races the National League South has seen for some time, as we approach the halfway stage there are eight clubs just two wins or fewer away from the top spot and several others who might fancy their chances of being in the mix.

That’s a considerable change from earlier in the season when visitors Dartford threatened to run away at the top of the table, winning seven of their opening eight games. A stumble in the FA Cup against AFC Sudbury, however, has seen Dartford win just two of their nine league matches since, but our opponents – like ourselves – remain very much in contention for both automatic promotion and the play-offs.

Manager Steve King admitted he might bring in new faces to keep Dartford ticking over and one already through the door in time for the derby game is former Torquay winger Kalvin Kalala, who made his debut as Dartford fought back to draw 2-2 at Braintree earlier this week.

While Fleet have outscored Dartford by eight goals this season, the Darts aren’t short of attacking players. Kalala is joined by fellow wide men Luke Wanadio, Danny Leonard plus more advanced strikers in the form of Jake Robinson, Dan Roberts and top scorer Ade Azeez. And in the middle much is driven by Kieran Murtagh and Noor Husin.

Skipper Tom Bonner is, of course, a former Fleet player and he’s joined by the Fleet’s Elliott Romain in potentially lining up against his former side… but that’s it as far as ex-players are concerned for this one.

Despite the fact Fleet have scored more, Dartford have conceded fewer – their 17 goals against the best in the division this season. How either of those stats bears out on the afternoon will say much about whether the Darts can achieve a first league win at Stonebridge Road since a slender 1-0 victory back in 1979 or whether Fleet will maintain their noteworthy home record.

PLEASE ARRIVE EARLY AND BUY AN ADVANCE TICKET IF POSSIBLE
Online sales and on the day ticket sales are explained below. You can purchase tickets at the ground from 10am on the day and our ticket windows will be in operation for on the day sales. No cash or ticket transactions will be taken at the turnstiles.

There is no segregation in place so both sets of supporters are free to use the Stonebridge Road or Swanscombe End turnstiles. The Social Club bar behind the Plough End and our outdoor can bar are in operation for refreshments, together with burger vans and kiosks.

ONLINE SALES
Our online ticketing sales platform at fleetlive.club has tickets available until noon on matchday. Again, we would advise pre-purchase for both your and our convenience in gaining admission to the ground. Online ticket sales for today’s game cease at noon.

CAR PARKING
Car-parking as per usual on matchdays is available at Ebbsfleet International Car Park C for £3. Please have the correct change if possible to aid our parking staff and again, we would recommend an early arrival. Please note that the areas near to Northfleet Station, namely Railway Street and Hamerton Road, have recently become resident/permit-only parking and non-valid vehicles will be ticketed. The area on Thamesway before the roundabout as you approach the Kuflink Stadium is a designated clearway – though that is not particularly apparent as you approach – so you are advised not to park here because of the risk of being ticketed.

Programmes are also on sale at the ground from the club shop, the Main Stand tea kiosk or in the Social Club behind the Plough End, costing £3. Advance-order programmes will be available to pick up from the club shop before the game and before you enter the turnstiles.

COVID REGULATIONS
Please see this update with regard to the wearing of face coverings and other currently recommended advice about Covid-19 and football at our level.

Ed Miller has been Ebbsfleet United's communications manager and programme editor since 2014 and responsible for the club website since 2007. Contact him on ed.miller@eufc.co.uk
PrevPrevious22 derbies for the ’22 derby
NextFleet 1-0 DartfordNext