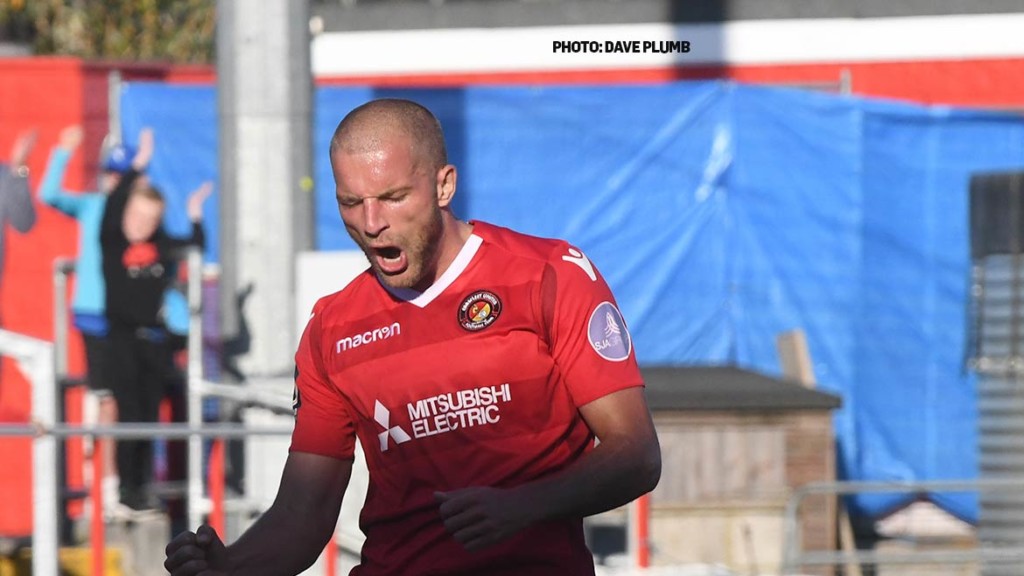 It’s the second new ground this season for the Fleet as Salford City’s Peninsula Stadium awaits – and perhaps offers the toughest test yet for Daryl McMahon’s squad. After a tricky start, the Manchester favourites for the title have risen to the challenge of their billing and currently top the table, having not lost since back-to-back away defeats at the start of the season.

Unbeaten at home, Salford’s juggernaut rolls on, Graham Alexander’s side looking to steal a march on Wrexham who are breathing down their necks on equal points. Fleet’s trip to Wrexham proved to be something of a battering and McMahon knows this next venture north needs to see a sharp improvement.

“It’ll be a tough one,” McMahon said. “I’ll be very surprised if they don’t win the league. They’ve signed some terrific players but we’re looking forward to it and we’re not bad away from home, we had a great record away in the last year. It’s 11 v 11 like it is every game. They’re playing very well, they’re probably champions-elect but I’m sure we can go there and give them a game. These results aren’t set in stone, if they were we’d probably have more points at home if you look at it on paper like that. Braintree drew there the other week, so we’re looking forward.”

The manager is also battling rumour off the field but has urged his tight-knit squad to “stick together” in the current period. On the field, buoyed by the 4-0 Emirates FA Cup win over Worthing, with Salford meanwhile toiling to a 2-1 win at Marine, the Fleet can go into the game confident they’ve rediscovered their shooting boots, albeit against lower-league opposition.

Joint top scorers in the division, Salford are unbeaten at the 5,000-capacity Peninsula Stadium. Only Leyton Orient on the first day of the season and bottom club Braintree Town two weeks ago have taken any points home from visits there this season. Manager Graham Alexander, formerly of Fleetwood Town, made big changes to the promotion-winning squad in the summer but they’ve had little problem clicking although that wasn’t evident early on in the season, the boss claiming earlier this week “That was my fault. With new players getting to know each other, we didn’t give [them] enough time at the start of the season before I started getting frustrated. I took a step back and gave them some breathing space.”

Adam Rooney, the big signing from Aberdeen in pre-season, has scored 13 goals this campaign with former Bristol Rovers frontman Rory Gaffney lending weight to a formidable attack. The squad also includes Danny Whitehead who won the league with Macclesfield last season and Danny Lloyd, who played in League One with Peterborough United in 2017/18.

• Fleet supoorters are invited to use Turnstile ‘A’ on Moor Lane (the end nearest to the church) as it leads directly to the East Stand (away end of the ground) – visiting fans usually prefer to congregate there even when the game isn’t segregated. Refreshments and programmes (priced at £2) are available in the fan-zone, situated behind the West Stand. As supporters will not be segregated, Fleet fans are welcome to use the ’92 bar (situated in the North Stand) and Fanzone (situated behind the West Stand terrace).

Ed Miller has been Ebbsfleet United's communications manager and programme editor since 2014 and responsible for the club website since 2007. Contact him on ed.miller@eufc.co.uk
PrevPreviousWalking footballers in charity game
NextSalford City 1-1 FleetNext