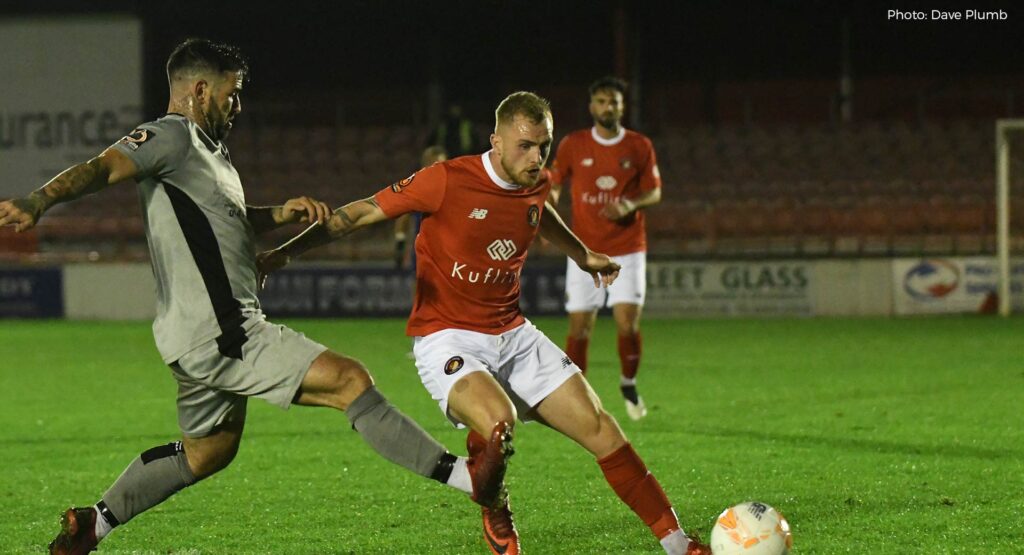 Clarence Park hosts our second away day of the 2020/21 campaign with the Fleet making the first trip to St Albans since a 3-0 win in March 2017.

The two sides have identical records of a win and a draw each going into this fixture, St Albans gaining their points courtesy of a win at home to Hampton & Richmond and a 1-1 draw at Concord Rangers.

And Ian Allinson’s side, like the Fleet, also had a spot-kick decider in midweek, the Saints needing penalties to overcome Northern Premier League outfit Mickleover in the Emirates FA Cup.

Dennis Kutrieb will go without the suspended Jake Goodman but with Charlie Rowan slotting in very well against Chippenham Town and the return to the bench of Ben Frempah, there’s cover in defence.

Bobby-Joe Taylor (pictured) was another who returned to the fray on Tuesday night with a battling performance on the left and it all gives the manager plenty of selection options ahead of the trip to Hertfordshre.

“We have a big squad,” he said on Tuesday night. “All of them want to play but all of them have to deserve to play. Now it’s a moment where they can play, and they can show that they’re better than the others. It’s all about showing that you are good enough for the squad and that you are prepared to win the game for us.”

Like most clubs over the extended summer, St Albans have had to reshape their squad. A number of familiar faces stand out, with former Fleet trialist and Chelmsford City striker Shaun Jeffers making the move in the summer. Meanwhile, the experienced David Noble in midfield and ex-Dartford full-back Tom Bender remain from our previous visit to St Albans.

One newcomer this summer is Luke Warner-Eley who was part of the Royston Town side that won at the Kuflink Stadium in the FA Trophy last season.

Nearly five years at the helm, manager Ian Allinson has previously won promotion from this division with Boreham Wood and for two seasons had City hovering around the play-off zone. Last season, however, the Saints were marooned in 20th place when lockdown hit the sporting calendar and his summer recruitment is intended to harness a major improvement.

Fleet have a good record against St Albans with just one defeat (in 2015) in 16 games – Allinson’s sides have always been well-organised and tough to break down, however, and like ourselves have conceded only one goal across their two league games to date.

Ed Miller has been Ebbsfleet United's communications manager and programme editor since 2014 and responsible for the club website since 2007. Contact him on ed.miller@eufc.co.uk
PrevPrevious‘Away’ hospitality at home this weekend
NextCompetition: red faces for match entryNext