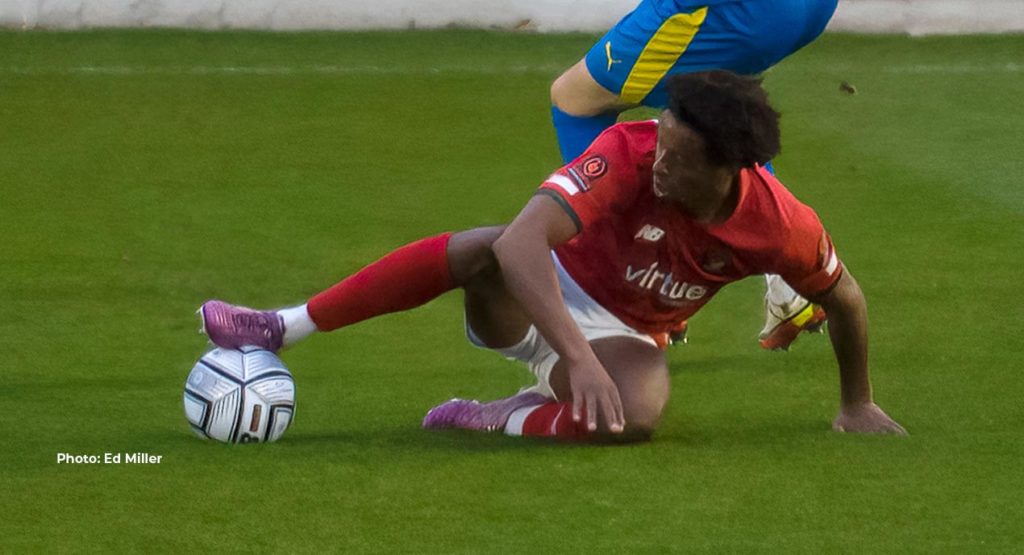 Preview: Romans on the road in rescheduled showdown

While all the talk outside the Fleet training ground will be of the chance to take top spot with a win, Dennis Kutrieb is focusing only on the all-important three points – and not where his side will finish this December day. The fact that three points will achieve that summit position is lost on no-one but for the Fleet manager, it will be just another step towards his end goal.

This last match before Christmas will be third time lucky at the Kuflink Stadium to get this fixture played after the original game was postponed from October 30th and then again moved from December 7th to this Saturday – the first meeting of the Fleet and Bath since February 2017.

Tobi Adebayo-Rowling serves the second of his three-game suspension so Sido Jombati (pictured top) could well get the chance to appear against his former side.

The form book points to three points for somebody for sure since the Fleet and Bath have cooked up the fewest number of draws between them all season – we’ve recorded just the one draw while our visitors have yet to end a 90 minutes on level terms in 16 attempts in the league.

That leaves Bath’s record this season as won six, lost 10 – and their form since the original match on October 30th was postponed has been fairly balanced with three wins and three defeats in that time. But it is certainly better than their situation in October when they had lost four games in quick succession while Fleet were looking for an eighth straight win.

A number of squad tweaks have taken place since that postponement, with the Romans’ big summer signing – Ben Gerring from Woking – departing the club for Gloucester City. Also leaving is experienced midfielder Ryan Harley while long-serving defender Dan Ball has headed out on loan for the remainder of the season.

Bath have used that time to bring in some new blood as well, with striker Dave Sims-Burgess joining from Yate Town and left-back Zak Delaney in on loan from West Bromwich Albion as manager Jerry Gill seeks to reverse a surprisingly poor start from his side.

Bath reached the play-offs at the end of the prematurely ended 2019/20 season but struggled to find momentum last season. A number of promising summer signings suggested a better tilt at the top positions again this season but it has so far failed to materialise with the Romans falling from third after the first two games to a low of fourth-bottom at one stage.

They’ve picked up since then and back-to-back wins over Concord Rangers and – impressively – away at Havant & Waterlooville suggests a corner has been turned, although Bath did fall to a late defeat last week against Hungerford.

Add into the mix a draw with Dartford in the FA Trophy (albeit losing the tie on penalties) and Bath are proving a lot more resilient than in earlier contests such as their 5-1 defeat Oxford City or 4-1 reverse at Dorking.

Top scorer this season is former Truro City forward Cody Cooke who has found the net eight times, while strike partner Alex Fletcher has five – and those two players have grabbed the lion’s share of the 19 in total Bath have scored this season.

ONLINE SALES
Our online ticketing sales platform at fleetlive.club currently has tickets available for our next four matches. Again, we would advise pre-purchase for both your and our convenience in gaining admission to the ground. Online ticket sales for this Saturday’s game cease at noon on Saturday matchdays.

CAR PARKING
Car-parking as per usual on matchdays is available at Ebbsfleet International Car Park C for £3. Please have the correct change if possible to aid our parking staff. Please note that the areas near to Northfleet Station, namely Railway Street and Hamerton Road, have recently become resident/permit-only parking and non-valid vehicles will be ticketed. The area on Thamesway before the roundabout as you approach the Kuflink Stadium is a designated clearway –though that is not particularly apparent as you approach – so you are advised not to park here because of the risk of being ticketed.

Please be aware there is a temporary three-way traffic light control at the top of Stonebridge Hill towards Northfleet High Street so please plan your journeys accordingly.

Programmes are also on sale at the ground from the club shop or in the Social Club behind the Plough End. The price for this game is reduced to £2 since we are using the printed stock from the original game – the original postponement came very late in the day and our programmes had already been paid for, printed and delivered.

Advance-order programmes will be available to pick up from reception before the game.

COVID REGULATIONS
Please see this update with regard to the wearing of face coverings and other recommended advice about Covid-19 and football at our level.

Ed Miller has been Ebbsfleet United's communications manager and programme editor since 2014 and responsible for the club website since 2007. Contact him on ed.miller@eufc.co.uk
PrevPreviousUpdated Covid measures
NextFleet 3-0 Bath CityNext