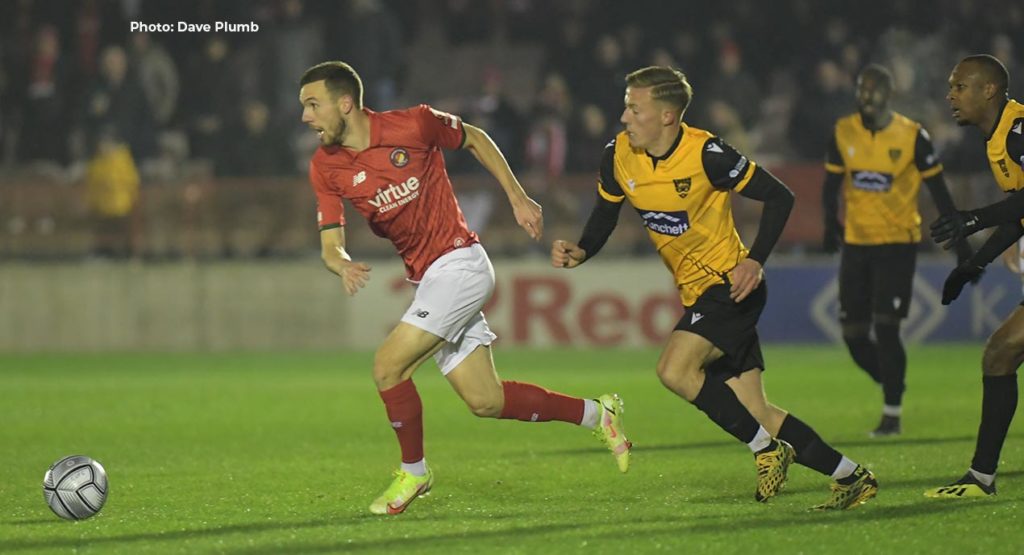 No sooner had the final whistle sounded at Dorking on Saturday than Dennis Kutrieb summoned his nine remaining players into the post-match huddle alongside squad and staff members and told them to move on to Tuesday night’s Kent derby visit to Maidstone.

“I said to the boys straight away [after the final whistle], let it go, it can happen,” said the manager. “Tuesday we have enough players in the squad available so I’m not concerned about it at all. We start again, 0-0, 11 v 11 and a completely different game.”

And Kutrieb will be aiming for a similar response to the one the last time Fleet conceded five goals – with the team putting that early December Dulwich defeat behind them to go on a run of four wins and a draw.

The Fleet boss indicated personnel changes would be highly likely as he awaited news on the injuries to Sido Jombati and Rakish Bingham at Dorking. Bingham was one of the goalscorers in the last meeting between the Fleet and Maidstone, putting his side 2-1 ahead before the visitors’ revival.

Now the shoe is on the other foot, with the Stones the hosts this Tuesday night – their expectant supporters likely to dwarf the Fleet’s 300 allocation in terms of numbers but not necessarily noise!

Expectant because, for Maidstone, there will be added pressure to collect points. Back in November, on a poor run of form, Hakan Hayrettin’s side weren’t expected to take all three points and their supporters travelled in trepidation that turned into triumph.

Now the Stones lead the Fleet by one place and one point in the table, with both sides determined to reduce Dorking’s lead at the top.

Maidstone’s return to form saw them top the table at one point but recent issues around goalscoring have come to a head, with a 0-0 draw at St Albans on Saturday following a late point saved in a 1-1 draw at Billericay. Indeed that is the main contrast between the two sides – with Fleet having scored 10 more goals than Maidstone… but equally the Stones having conceded 10 fewer.

And in terms of current form, Maidstone top the home table and will be seeking to press that advantage when the Fleet visit town. Hayrettin’s team have welcomed centre-half Joe Ellul and forward Jack Barham back from injury since we last met and added Watford U23 striker Jimiel Chikukwa on loan to the end of the season. Former Fleet winger Jermaine McGlashan, meanwhile, has departed for Leatherhead.

Joan Luque is top scorer with 10 in the league but the Stones bring goals from midfield, as they showed at the Kuflink Stadium when Sam Corne’s brace proved crucial. Goalkeeper Tom Hadler is the only ex-Fleet face likely to be on show, while Jack Paxman, Alex Finney and Kresh Krasniqi all return to their former home.

Fleet have won their last three league visits and two Kent Senior Cup ties at the Gallagher Stadium so will be looking to extend that fine record of five straight victories in the county town come 9.30pm.

The Gallagher Stadium’s away allocation of 300 sold out in less than a day to Fleet fans – tickets will be scanned at Turnstiles 8/9, which open at 18:15. There are no away tickets remaining on sale, with only turnstiles for home supporters accepting on-the-night purchases.

Ed Miller has been Ebbsfleet United's communications manager and programme editor since 2014 and responsible for the club website since 2007. Contact him on ed.miller@eufc.co.uk
PrevPreviousMekki banks on bounceback
NextMaidstone United 4-0 FleetNext