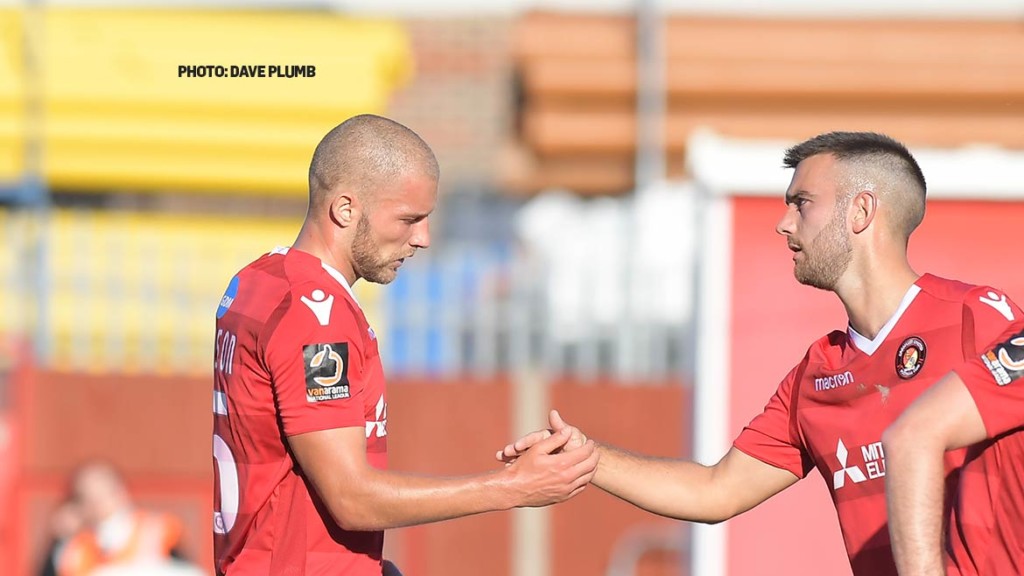 Who will blink first in Tuesday night’s Kent derby? With both clubs in a state of flux and equally eager to start climbing the table, the key to victory surely lies in whose belief better stands up to the test of this typically intense affair.

Fleet’s confidence is likely as high as it’s been for some time this season, with a 4-0 win at home in the FA Cup followed by a sterling performance at the league leaders. Maidstone’s, after an initial accrual of points on Harry Wheeler’s succession to Jay Saunders and an excellent win over Leyton Orient, might well have taken a hit in what was, by all accounts, something of a horror show at home to Solihull Moors on Saturday.

But the Stones, with a better away record than on home soil, will be all too aware that Fleet’s recent fortitude can be threatened at the Kuflink Stadium by concession of an early goal and whoever makes the breakthrough is odds-on to clinch the result.

Fleet’s recent resilience has come about with a switch to a back four and with Dean Rance still suffering from some soreness in an ankle injury, there would seem no immediate requirement to alter the setup from Saturday. With Luke Coulson getting a run of games and Corey Whitely and Myles Weston showing plenty of threat, those players have the wherewithal to unlock a Maidstone defence that didn’t perform to its best at the weekend.

Manager Wheeler has taken steps to address that and there will definitely be one change for the Stones with goalkeeper Lee Worgan having moved on to Dover Athletic. While that’s a loss of a Gallagher Stadium icon, his replacement is a very good one, former Boreham Wood goalkeeper Grant Smith joining from Lincoln City on loan. Smith was excellent last season as Wood made it to the promotion final and his presence is sure to calm the Maidstone back four… though with a recent clean sheet against Leyton Orient in the FA Cup, reports of defensive frailty may be greatly exaggerated.

Another potential change could be new signing Rob Swaine who has crossed paths with the Fleet many times in the past. The former Bromley skipper didn’t feature on Saturday but must be eyeing a start at the expense of either Alex Finney or Will De Havilland. Up front, Elliott Romain has already played against the Fleet this season, grabbing an assist in Dagenham’s 3-1 defeat, although he has had to settle for coming off the bench in his last two games.

Skipper Blair Turgott, who inherited the armband from the outgoing Stuart Lewis, is the chief danger man. Turgott is the only name to be found on the Maidstone scoresheet in league games this season of the current squad, bar one goal by Jack Paxman, and he’s netted some real eye-catching strikes for the Stones.

It’s certainly been all change at the Gallagher this season, with Wheeler having now signed nine and seen a similar number depart either permanently or on loan. Swaine and midfielder Simon Walton previously worked with the manager at Billericay, while he’s added three on loan from northern climes – defender Jack Doyle (Blackburn Rovers) and strikers Gold Omotayo (Bury) and Jake Cassidy (Hartlepool). Other newcomers include Olu Durojaiye (Braintree) and of course the unavailable Jack Powell.

• Tuesday’s match is segregated, with Maidstone fans allocated the Swanscombe End and they should enter via those turnstiles. Car-parking is available for all supporters at Ebbsfleet International Car Park C for £3. We advise all drivers to park here to avoid being ticketed or disrupting our neighbours in residential streets.

Ed Miller has been Ebbsfleet United's communications manager and programme editor since 2014 and responsible for the club website since 2007. Contact him on ed.miller@eufc.co.uk
PrevPreviousChanges at the top
NextFleet 1-1 Maidstone UnitedNext