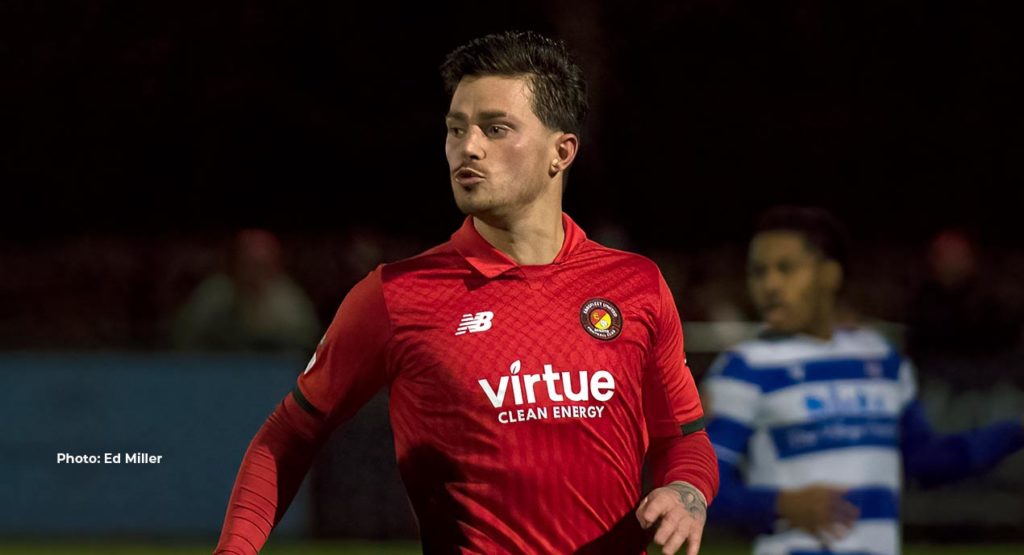 The Fleet head into 2022 looking to regain top spot for the New Year just as they held it for Christmas, with Billericay Town visiting the Kuflink Stadium for the last afternoon of action in another unconventional 12 months for the Vanarama National League South.

Fleet fans will be as eager for football as their management and players after a postponed Boxing Day, with the 3-0 win over Bath City 10 days ago the last live game to be played here. Since then, Oxford City returned to the summit but they are without a game this week due to a postponement at opponents St Albans City.

That match against Bath saw Fleet able to field only the 14 players named on the teamsheet, with Covid cases accounting for the low availability which then carried on with additional cases through the week up to and including Boxing Day. Many of those original missing players have emerged from their isolation periods in time for the Kuflink Stadium to host Tuesday’s Bank Holiday clash against Billericay, thus giving supporters one last 90 minutes in this calendar year.

Dennis Kutrieb still has a couple of the existing longer-term injuries to deal with, while Tobi Adebayo-Rowling remains suspended thanks to the final instalment of his three-game ban.

This is Billericay’s first visit to the Fleet for almost 20 years, when a 1-0 win sent us towards the Ryman Premier title – and the only other meeting of the sides came in Essex last season when Kutrieb’s side secured a 2-1 victory, Jack Paxman scoring one of the goals against his former employers.

Having started the season under the stewardship of one-time Fleet boss Kevin Watson, the Blues are now managed by former Welling and Heybridge boss and Dagenham assistant Jody Brown. And while the Essex side remain rooted to the bottom of the table, they have made life more difficult for opponents in recent weeks, with single-goal defeats to Hampton and Dartford and a penalties reverse at Maidstone in the Trophy. They also earned a goalless draw with county rivals Chelmsford last weekend.

And in Brown’s first games in charge, the Blues also achieved their only two wins of the season in quick succession, so the new boss is certainly stamping his imprint on his squad.

The Blues side has plenty of experience with former Fleet trio Lawrie Wilson, Marvel Ekpiteta and Bagasan Graham in the side. Norman Wabo is another familiar face up front, and he’s joined by ex-Barnet striker Shaq Coulthirst and recent signing Femi Akinwande from Braintree, who has played here already for his previous club this season.

One problem area for Billericay this season has been in goal with several players pulling on the gloves over the past months – the latest incumbent is Rhys Lovett, who has just signed from Maidenhead United, succeeding former Fleet reserve Clark Masters.

Lovett made his debut against Chelmsford and also played in the most recent game, a 3-1 home defeat by Concord Rangers, the Blues opening the scoring in that one after only six minutes before the Beachboys bounced back to hit three goals and bag the three points.

Former loanee Wabo, who featured in our 2017/18 play-off campaign and scored in the shootout win over Aldershot, is Billericay’s top scorer on four so far this season – with defender Chambers only one behind him on three.

Billericay come in search of their first ever win at the Fleet, with their only previous victory of any sort in nine attempts back in 2000 at New Lodge.

ONLINE SALES
Our online ticketing sales platform at fleetlive.club currently has tickets available for our next two matches. Again, we would advise pre-purchase for both your and our convenience in gaining admission to the ground. Online ticket sales for today’s game cease at noon.

CAR PARKING
Car-parking as per usual on matchdays is available at Ebbsfleet International Car Park C for £3. Please have the correct change if possible to aid our parking staff. Please note that the areas near to Northfleet Station, namely Railway Street and Hamerton Road, have recently become resident/permit-only parking and non-valid vehicles will be ticketed. The area on Thamesway before the roundabout as you approach the Kuflink Stadium is a designated clearway – though that is not particularly apparent as you approach – so you are advised not to park here because of the risk of being ticketed.

Please be aware there is a temporary three-way traffic light control at the top of Stonebridge Hill towards Northfleet High Street so please plan your journeys accordingly.

COVID REGULATIONS
Please see this update with regard to the wearing of face coverings and other currently recommended advice about Covid-19 and football at our level.

Ed Miller has been Ebbsfleet United's communications manager and programme editor since 2014 and responsible for the club website since 2007. Contact him on ed.miller@eufc.co.uk
PrevPreviousBillericay game remains on
NextFleet 0-0 Billericay TownNext