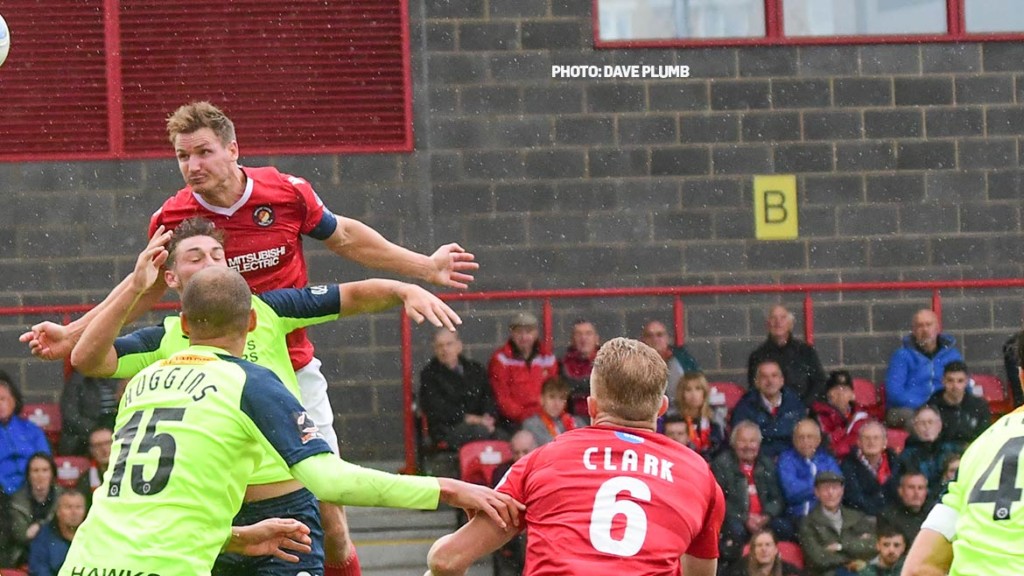 With Fleet’s sterling away form continuing apace last weekend at Dagenham & Redbridge, eyes turn once more to the Kuflink Stadium where the home team will need to be at least as effective as they were in Essex. Third-placed Harrogate Town, in their first ever match against the Fleet, may be the new kids on the block but they have lost just one game this season and remain unbeaten on their travels.

Ebbsfleet were buoyed last Saturday by the arrival of Reise Allassani on loan from Coventry City and his home debut is eagerly awaited by Fleet supporters, with only a fifth of the Stonebridge Road faithful having seen him in action.

Expectation surrounds the 22-year-old, but is it too much burden on one player after one game? Daryl McMahon thinks he can take that in his stride.

“The fans expect now but he probably expects it from himself too,” McMahon told eufc.co.uk. “If we’re realistic, if any player is capable of doing that every week, they’ll be in the Premier League. Reise has had a very, very good debut but he’s still a young player and he’s learning. We’re not going to put pressure on him. All we ask of him is to go and do what he can do. He’s a match winner, he makes things happen and he’s enthusiastic and exciting. But he’ll probably make mistakes like everyone does and you’ve got to accept them and hopefully, if he plays as we know he’s capable of, he will have more and more good moments. He’s a very talented footballer and we want to help him develop in this period before he goes back to Coventry.”

Fleet have the attacking player in their ranks for three months and if his link-up play with Corey Whitely and Danny Kedwell was anything to go by after one game, then he’s sure to give McMahon’s forward line a sharper edge.

Allassani was on the manager’s wanted list long before the loan deal was concluded last week and McMahon’s policy of keeping tabs on players who initially slip through his grasp has paid off.

“We knew what Reise could do from last year and we’ve kept an eye on him even though he went into the League,” McMahon said. “I spoke to his agent a couple of weeks ago and asked if there was a possibility of him going out on loan. We stayed in touch from that point and now we’ve managed to get him in.

“Supporters probably only see two of every 10 players we pursue because for whatever reason – them going higher up the leagues, wanting too much money, costing a transfer fee, location, whatever – the deals don’t get done. But we’re always looking for quality players and as we’ve seen with Reise, it’s worth keeping in contact even if you don’t initially get them.

“We’re happy with what we’ve got in the squad now,” McMahon added. “We’ve got a strong group and I hope Reise will strengthen that as we play a few more games together. It was really important getting Clark and Winfield back together too and alongside Bushy; that’s only the second time in 14 games and that’s a positive.”

Dean Rance should be fit for selection despite departing at half-time last Saturday with a knock to his knee and the Fleet boss has no further injury worries. And after Saturday is done, he also welcomes back Jack Payne from his loan at Eastleigh to increase the competition for places once more.

Harrogate arrive from North Yorkshire in terrific form and with an abundance of attacking players, with their goals total of 28 the highest in the league.

“They’ve done well and have some good players who know the level,” said McMahon. “Players like [former Fleet defender] Kelvin Langmead, Callum Howe is a good player who we came against at Eastleigh last year. Emmett in midfield scores some good goals and Jack Muldoon up top has been around the league as well. So there’s plenty of attacking and talented players but again we’ve got to focus and hit our level that was very high at Dagenham and we need to repeat that.”

Summer signing Muldoon won this division with Lincoln City and was one of AFC Fylde’s standout performers last season. He’s scored six goals this season and his strike partners aren’t far behind him. Dominic Knowles who was on the bench last week is a fitness doubt in attack but they can call on another summer signing, Aaron Williams, who once scored a hat-trick at the Fleet for AFC Telford United. Big target man Mark Beck is another option from the bench, while Town have plenty of creativity and goals in midfield too.

If they have a weakness, it could be in defence with their 15 goals conceded the highest of the top ten teams, though they have kept clean sheets against both Wrexham and AFC Fylde.

The game may come too early for right back Ryan Fallowfield and striker Jordan Thewlis though both injury victims returned to training. Left-back Ben Parker is one who definitely won’t play having departed the club this week.

Harrogate boss Simon Weaver told his club’s website, “Looking at Ebbsfleet, at the match coverage, they’re probably in a false position so we expect them to be well-equipped to have a really good run at some point, but hopefully after this week. They seem to play a similar shape to what we played against last week at Boreham Wood, full of fit strong lads with good experience. And they’ve got a good lad in on loan who can float about the place and he’s very pacy.”

Saturday’s match will not be segregated so supporters are free to stand in the Swanscombe End. Ebbsfleet International Car Park C, a short walk from the stadium, is available for car-parking at £3. Roads on the approach to the ground may be ticketed, particularly Thames Way by the roundabout and as ever the club urges supporters to use the station car park.

Ed Miller has been Ebbsfleet United's communications manager and programme editor since 2014 and responsible for the club website since 2007. Contact him on ed.miller@eufc.co.uk
PrevPreviousSevenoaks Town 1-1 Fleet (1-3 pens)
NextFleet 0-2 Harrogate TownNext