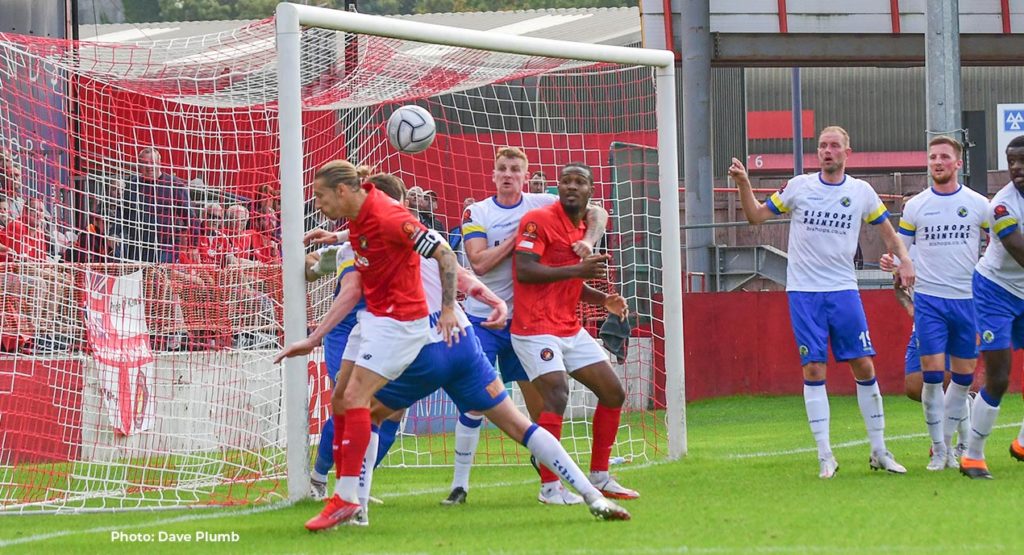 Across Britain hatches are being battened down in preparation for Storm Eunice but the South Coast might equally be readying itself for the usual tempest that is an Ebbsfleet-Havant fixture.

Sure to produce goals or drama or both in recent seasons, there have been three goals scored in each of the last three meetings, six shared in a remarkable 3-3 draw the time before that, while Fleet also hit seven not so long ago in an FA Cup tie.

Add in last season’s 2-1 win at Westleigh Park for the Fleet, which saw three on-field red cards and two off-field sendings-off and the recipe is there for another competitive 90 minutes.

You have to go back nine matches and seven years to find the last time the home side won a league fixture between the clubs, when Havant won 2-0 on their own patch, and that’s a sequence the travelling Fleet will want to maintain this weekend.

After a week of contrasts – a 5-0 brushing aside of St Albans and a surprise home defeat by Slough – the Fleet will be going full-tilt for the three points in Hampshire. Newest recruit Ashley Nathaniel-George came through 45 minutes of his debut as a second-half substitute so might have good cause to be knocking on the door for a starting place, though the recent goalscoring form of both Adam Mekki and Will Wood saw both of those get the nod ahead of the Southend loanee last Saturday.

“Havant is a tough game away,” said Dennis Kutrieb, whose biggest regret last week was not so much the one defensive lapse but the wastefulness up front by his side. “Havant are struggling at the moment so they need to get points as well. They bring in five or six new players in the last week so they definitely want to turn it around.

“We need to start being more consistent and have the determination to put the ball in the back of the net in the first half. Then we have the lead and the game is completely different.”

The new players Havant have brought in this year are certainly manager Paul Doswell’s latest move to arrest some alarming form that has seen the Hawks slip down to 14th place, below Saturday’s opponents Slough Town. One of their new recruits, signed from Slough, was defender Guy Hollis who is already sidelined by an injury. He joins former Fleet man Sam Magri on the treatment table, along with Paul Rooney (ankle) and potentially Oscar Gobern (broken toe).

Other new faces for the Hawks are midfielders Sam Smart (Eastleigh) and Alfy Whittingham (Aldershot Town) plus strikers Manny Duku (Inverness Caledonian Thistle) and former Fleet signing Stefan Payne (Chesterfield). Departing the club are veteran Nicky Bailey and one of the club’s big summer signings James Roberts, who has joined Hampton on loan.

A lack of goals has prompted the captures of Duku and Payne, with only seven-goal Tommy Wright having scored more than two amongst the Hawks strikers. Midfielder Jake McCarthy has six but Havant have the lowest goals-for total of the top 16 clubs in the division.

Defensively, an 8-0 whopping at Dorking in similar circumstances to our own defeat there (with an early red card) has done little for confidence and Havant conceded another three in a defeat at Concord last Saturday. Their last win came back in mid-December at Eastbourne, their only victory in the last 12 league games.

And for a home win, Havant fans have to go back even further to October for the last of only two victories on home soil. It’s a record that is ripe for improvement and the Hawks would like nothing more than to reverse their recent slump against the Fleet.

They did just that in a lightning start at the Kuflink Stadium earlier in the season, Wright and Scott Rendell netting twice inside the first five minutes. Former Sutton striker Wright also found the net twice the previous season in the corresponding fixture when Havant won 3-0.

This will be Fleet’s 11th visit to Westleigh Park if matches against the old Havant Town are also taken into consideration with four wins, five defeats and just the one draw from trips there thus far.

The referee for the match is Andrew Humphries who was in the middle for our 2-1 win on another stormy day last season in torrential rain at Chippenham, plus the 1-1 draw with Dulwich Hamlet at the Kuflink Stadium in 2020.

Fleet fans are reminded that drums are not permitted to be brought in to games at Westleigh Park while payments are on the gate and strictly cash only.

Ed Miller has been Ebbsfleet United's communications manager and programme editor since 2014 and responsible for the club website since 2007. Contact him on ed.miller@eufc.co.uk
PrevPreviousAlan Woods
NextHavant & Waterlooville 4-2 FleetNext