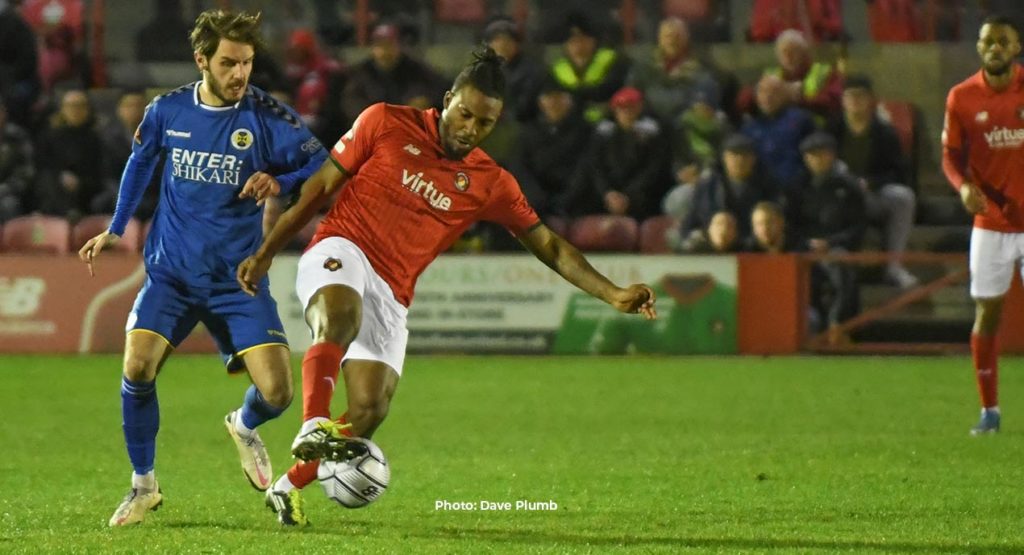 Just five weeks on from Fleet’s memorable 5-0 victory over St Albans City, the two sides go head-to-head once more, with both of them seeking to shake off the disappointment of late conceded goals in midweek and set about climbing back up the table.

For the Fleet, after Saturday’s results had gone in their favour, Tuesday’s were very much more of a mixed bag. Not that other results should be the focus for his side, Dennis Kutrieb has repeated, but only the game they have coming up next.

With Clarence Park the venue, the Fleet hope to welcome back Greg Cundle in some capacity following his six-week spell on the sidelines but as has been the script in recent times, for every player coming back another has been lost to injury. The latest casualty for the Fleet was Kieran Monlouis, who limped off at the end of the Braintree game on Tuesday.

Two places separate the Fleet and St Albans but the points gap is rather wider, with the visitors eight points and +13 goals better off than their hosts – Ian Allinson’s side had hoped to make up much of that gap with the games in hand they had in reserve following their FA Cup exploits, but poor form has seen many of those potential points squandered.

Not that City are in too bad health in that department, as they still hold an advantage in the top seven over most of the trailing pack for one of the play-off spots.

It all points towards an entertaining encounter at Clarence Park, between two sides keen to right the wrongs of Tuesday night and consolidate their respective positions at the top end of the table. St Albans lost 2-1 to a late winner at bottom club Billericay Town, their third defeat in four matches and they have picked up only eight points from a possible 30 across their last 10 games.

With league top scorer on 23 goals – Shaun Jeffers – in their ranks, City pose an obvious frontal threat but have struggled to find the net regularly in recent times. Since mid-January, they have only scored more than a goal in two of 15 games and fired blanks in seven of those.

There’ll also be an urgency on the Saints’ part to dig out a result against the Fleet as five of their next six games all come away from home.

There’s very little change in the Saints squad since they came to the Kuflink Stadium with only Joe Neal added to the lineup, a young striker with 11 goals to his name from from Southern League Central Division side Biggleswade Town.

“We haven’t delivered again. We’ve become susceptible to set pieces and we need to score more goals,” was manager Allinson’s view on his side’s latest defeat.

St Albans have won only two of the last 18 matches with the Fleet, but one of those was our last visit to Clarence Park where the hosts came back from 2-0 down to win 3-2 in a season in which Allinson transformed them from relegation candidates to one of the leading pack.

This will be Fleet’s 13th visit to Clarence Park, with eight wins and four defeats to our name since 1972.

A reminder to Fleet fans that St Albans is a cashless stadium with tickets available in advance by clicking here or on the day at both the York Road and Clarence Park entrances to the ground (card payments only). Three pitchside bars and two food stalls are also available.

Ed Miller has been Ebbsfleet United's communications manager and programme editor since 2014 and responsible for the club website since 2007. Contact him on ed.miller@eufc.co.uk
PrevPreviousPost-match reaction: Braintree
NextWesty heads east to the BayNext