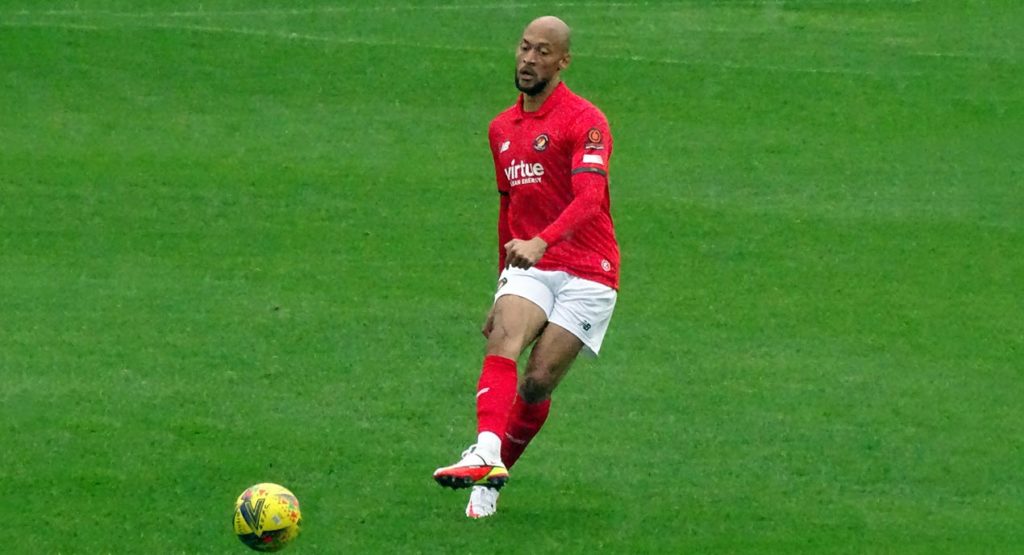 Preview: Fleet aim to wow down in Slough

Staggering league and cup action has suited the Fleet of late with three wins on the road in the Emirates FA Cup and Vanarama National League South. And an opportunity for a fourth presents itself with a visit to Arbour Park to take on Slough Town this Saturday.

It’s only eight months since a Rakish Bingham brace prised all three points from the Rebels as the league campaign petered out towards its eventually cancelled conclusion a few weeks later and Fleet will be aiming for a similar result to keep the forward charge generated by the win at Chippenham in motion.

After last week’s soggy, bumpy affair at Aylesbury, a kinder 3G surface awaits at Slough – and something of a selection headache, the kind he admits to liking, for Dennis Kutrieb. Having handed debuts to Alex Finney and Kieran Monlouis at Aylesbury, both more than impressed on their first outings. Add into that mix the return of Will Wood as a late substitute and the availability numbers in the Fleet squad are at their highest levels since the beginning of the season.

A win for the Fleet could potentially lift them as high as fourth although most of the current leading clubs in the division have games they should (“on paper”) prevail in.

For Slough, the message their management team will be hammering home is a response in front of what will likely be their highest crowd of the season. A humbling defeat at home to Isthmian South side Whitehawk in the FA Cup last week comes at the end of a troubled period that has seen the Rebels win just the one league game – against Chelmsford City on the opening day.

Not that they’ve proven easy to overcome on home soil, with both top-eight St Albans City and Chippenham Town only just taking the three points in tight affairs.

It’s been something of a downward turn form-wise since Slough made the play-offs at the end of the Covid-affected 2019/20 campaign and languishing in the bottom places last season, they were one of the clubs who gladly called time on 2020/21.

Still managed by their dual team of Jon Underwood and Neil Baker, Slough’s summer recruitment included the arrival of the experienced Freddie Grant from Bath City plus local youngster and midfielder George Hunt who had been with AFC Bournemouth. Both of those have played a full part in Slough’s season so far, alongside familiar faces such as goalkeeper Jonathan North (Wealdstone); midfielders Scott Davies (Wealdstone, Chelmsford and Oxford City) and Max Worsfold (Maidenhead United and Staines Town); and striker Tom Derry, formerly of Tonbridge Angels.

Derry has two goals to his name this season, as does fellow striker Ben Harris but goals have been otherwise hard to come by for Slough. They have also lost former Dover top scorer Ryan Bird to injury, although he has tended to play at the back in recent seasons. Midfielder and club favourite Warren Harris, who has been missing all season, has also resumed training but this match may come too early for his return.

As there are no Premier League or EFL Championship matches due to the international weekend, Slough are pleased to offer season ticket holders of any Premier League, EFL or non-league club (including Fleet ST holders) admission for the reduced price of just £5. To take advantage of this offer, season tickets must be presented at the turnstiles on the day.  There is also a ‘happy hour’ in the bar from 5.30 – 6.30pm, and later in the evening a screening of Andorra v England.

Ed Miller has been Ebbsfleet United's communications manager and programme editor since 2014 and responsible for the club website since 2007. Contact him on ed.miller@eufc.co.uk
PrevPreviousFleet paired with Hampton in last qualifying round
NextSlough Town 1-3 FleetNext