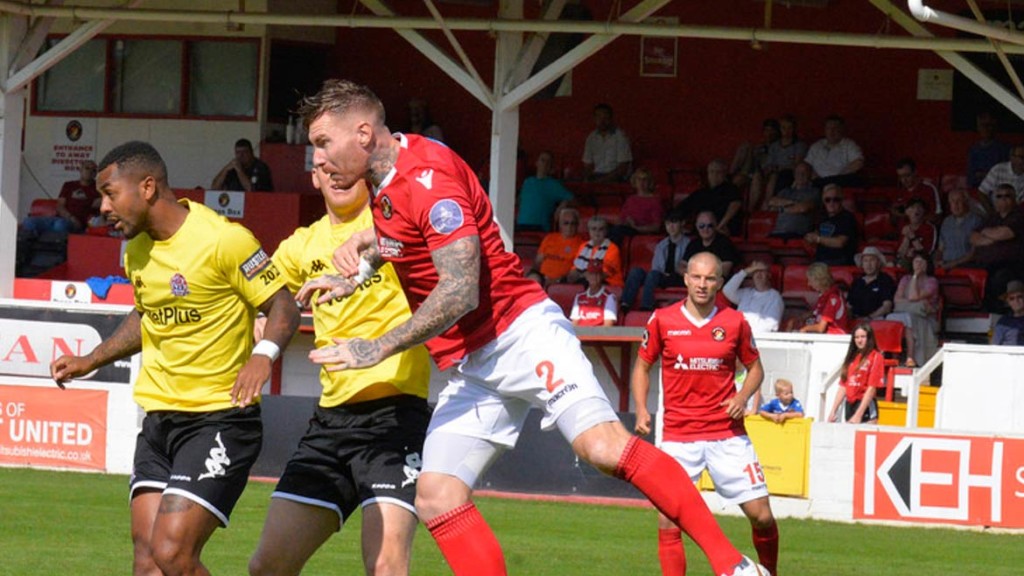 Crabble’s never been the happiest of hunting grounds for the Fleet. The KEH era began with a 2-1 defeat there in 2013 in our first away game following the exodus of Steve Brown and much of his new squad from Dover that summer. And before and since, the Fleet haven’t had much to cheer about.

Indeed we have only won one league game on Dover’s ground, when we recorded a 3-1 victory in our promotion season of 2010/11… or twice if you count the Andy Drury-inspired win over Margate in 2003 when the Blues ground-shared at Crabble.

But Fleet must be hoping to do to Dover what Sutton have done to us in the past few months, with the U’s having triumphed twice at the Kuflink Stadium having previously never won at Stonebridge Road.

Many visiting fans are eyeing this fixture as one that could change their luck at Crabble given Dover’s present malaise, but Daryl McMahon believes form goes out the window in a Kent derby.

“They’ll be up for it,” he said. “Teams always get up for games against their local rivals and they’ll be looking to this one to fire themselves up in a derby game.”

McMahon, of course, returns to his former club as do Dean Rance and, for the first time since his move in 2017, Sam Magri. The Maltese defender missed both fixtures against Dover last season, the first due to international duty and the second with an injury.

Fleet will look to bounce back from a 3-1 home defeat by AFC Fylde, who themselves thrashed Dover 4-0 in Lancashire earlier on in the season. Myles Weston said the players have to “bring their A game” to Crabble and that they welcome the potential quick response to Saturday that a game three days later provides. Once again, the selection options will be something for McMahon to chew on in the days following the Fylde game, having brought Luke Coulson into the starting lineup and seen substitute Corey Whitely respond with a goal straight out of the top drawer.

Chris Kinnear has headaches of his own with Dover having gained just one win – that a late 4-3 victory at home to Havant & Waterlooville – and a draw at Bromley. He drafted in two loanees last week, striker Ntumba Massanka from Burnley and left-back George Smith from Chesterfield, which meant former Fleet defender Jack Connors was dropped to the bench at the weekend. Smith has already played against the Fleet, for the Spireites on the opening day of the season.

Dover lost a number of players in the summer, including attackers Mitch Pinnock and Ryan Bird, so the responsibility for goals falls squarely on Jamie Allen, Massanka and former Woking striker Inih Effiong who scored the winner against the Fleet last season at Kingfield. Despite their lowly position, the Dover squad contains plenty of ability with the likes of former Maidstone defender Kevin Lokko alongside midfield dynamo Mitch Brundle. Newcomers since last we met include Tim Schmoll from Aldershot Town, journeyman midfielder Aryan Tajbakhsh most recently of Wealdstone and experienced ex-Barrow defender Moussa Diarra.

Another former Barrow player, with a history of scoring against us for both the Bluebirds and Sutton United, is Bedsente Gomis but he is likely to be missing through injury.

Ed Miller has been Ebbsfleet United's communications manager and programme editor since 2014 and responsible for the club website since 2007. Contact him on ed.miller@eufc.co.uk
PrevPreviousReminder on U12 admission policy
NextEastleigh gain Payne on month’s loanNext