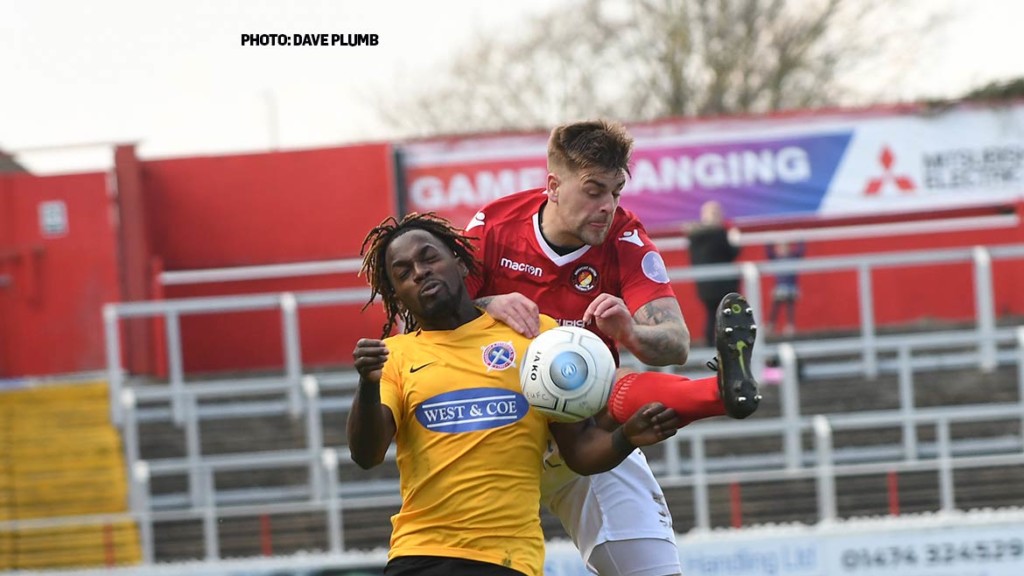 With just a point from the last two games having not quite proven fatal for the Fleet’s play-off ambitions, fate has decreed that six of them are a must from two Kent derbies to end the 2018/19 campaign.

There are probably simpler ways to end a season but Fleet are never ones to do things the easy way and a visit to the Kuflink Stadium from in-form Dover Athletic is hurdle number one as April – and with it the football season – comes to a conclusion.

If the eventful fightback in the hot sun took anything out of the squad at Havant & Waterlooville, then there’s no time to rest and reflect on that as they are pitched straight into a Kent derby 72 hours on from that remarkable match.

Jack King and Gozie Ugwu sat that one out and it will be 50/50 whether either of them are fit to face Dover so soon after failing fitness tests at Havant.

Either way, their replacements picked up respectable scores in the man-of-the-match vote, skipper Dave Winfield slotting into the back four alongside former Dover man Sam Magri while Danny Kedwell began the comeback at Westleigh Park with his 13th goal of the season.

And manager Garry Hill remains positive, even if the Fleet are reliant on other teams dropping points, as well as ourselves gaining them.

“Harrogate home against Gateshead on Monday, that won’t be easy,” he said. “They go to Wrexham last game. So it’s a massive game against Dover and puts more pressure on in one way but we have to go in there Monday and we have to believe. We’d have to turn around and done our utmost anyway, even if we’d won at Havant.

“Dover have done absolutely superbly under Andy Hessenthaler in the second half of the season and all credit to everybody at Dover. It’s going to be a tough game, we know that and even more so when the weather’s very hot out there. We’ve got to be ready.

“We’re still in with a shout, there’s no doubt about that. There’s two games to go, we’re three points behind Eastleigh, we’ve got a better goal difference.”

A repeat of last season’s 2-1 win against Dover might not do the hearts of Fleet fans any good but that was a similar ‘win-or-bust’ scenario and the home side just about managed it in the dying moments.

That was against a Dover side with its own play-off ambitions, whereas this one comes against a Whites team revelling in the freedom of a great escape from relegation and the prospect is none the easier for all that.

Andy Hessenthaler’s side, with only one win in 18 under former boss Chris Kinnear at the start of the campaign, are currently unbeaten in seven games – a run of form that has seen them pull clear of the relegation battle with consummate ease.

Alongside Bromley, they also lead the ‘mini-league’ of Kent sides, having achieved two wins and three draws in their five derbies to date.

Since our 1-1 draw at Crabble earlier in the season, Hessenthaler has recruited plenty of experience with former Fleet player-of-the year Stuart Lewis and goalkeeper Lee Worgan signed from Maidstone, while Ricky Modeste has returned to the county from Billericay Town.

Former Woking striker Inih Effiong is the Whites’ top scorer while ex-Sutton wide man Anthony Jeffrey came in for plenty of praise as Dover nicked a last-minute win against Aldershot Town on Saturday.

Lewis, of course, is one of numerous players with history on show on Saturday. He was sent off at Stonebridge Road on his last visit for a clash with Andy Drury, who of course scored the memorable last-minute winner v Dover last season.

Sam Magri and Dean Rance will hope to line up against their former club while on the visitors’ side, Worgan, Modeste, Taylor and Mitch Walker have all tasted play-off success on our ground and Bedsenté Gomis and Jai Reason have previously come off best in promotion tussles.

• The club will present this season’s man-of-the-match award ahead of kick-off as well as the Bruce Sewell Award.

•• The match is segregated and Dover fans will be allocated the Swanscombe End. Car-parking is available at Ebbsfleet International Station Car Park C for £3. This is the best option for parking near the stadium. Local businesses are continuing to contact us to warn against cars blocking private property. Drivers should not block areas around Watling Tyres, In-Car Wash (Grove Road), the Ebbsfleet Business Park and the Lower Road Industrial Estate. Furthermore, drivers are warned that parking on the Thames Way clearway near the roundabout runs the risk of being ticketed.

Ed Miller has been Ebbsfleet United's communications manager and programme editor since 2014 and responsible for the club website since 2007. Contact him on ed.miller@eufc.co.uk
PrevPreviousTwo weeks left for earlybird offer as sales pass 200
NextBruce Sewell Award goes to Maggie DanzeyNext