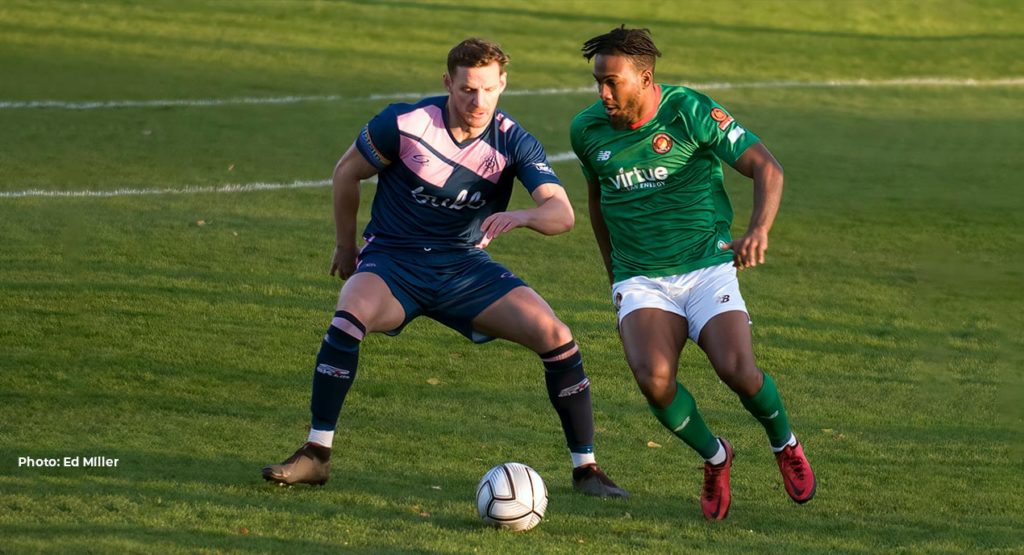 Preview: close or no cigar for Hamlet’s play-off promise?

Having entertained Hungerford on the last Kuflink Stadium matchday, Fleet now take on another side likely vying for that final play-off spot as Dulwich Hamlet make the short journey from South London looking to arrest a decline that has seen them slip to 10th place.

Back-to-back wins for Dennis Kutrieb’s side, following last week’s victory over Welling United meanwhile, might not ensure mathematical certainty for the play-offs but would provide the perfect platform to do so on Bank Holiday Monday at Concord.

“We have to win our home games and get points,” said the Fleet boss ahead of Good Friday. “It’s not just we want to, we have to. Dulwich are a really good side, I liked what they did when we played there, especially in the second half. They played a great game against us. Obviously they’ve struggled a little bit in the past weeks but they are a good side and they have many players back from injury so they’ll definitely be up for it. They know exactly if they want to be in the play-offs, they have to get something out of the game. Dulwich is not an easy game, especially when we need to go again on Monday.”

Joe Martin returns for selection following his one-game suspension though Alex Finney’s unscathed performance in defence at Welling last Saturday gives Kutrieb additional defensive options. With two appearances since he missed the Hungerford game, Shaq Coulthirst has shaken off any ill effects from a knock sustained against Dorking – and with three goalscorers from amongst Fleet’s strikers last Saturday, it’s another competitive position for the boss to pick from.

A win could potentially deliver third place for the Fleet, with Dartford travelling to Billericay Town, but the league placings are of little concern just yet as it’s all about amassing the points in this final few weeks of 2021/22.

That concern is even more pressing for the visitors. When Dulwich clinically fired their way to a 5-2 win over the Fleet before Christmas, they climbed towards a season high of third place. Since then, however, little has gone right for them. They won only one game in eight after that and are currently on a run of one win in nine.

Those stats will carry little meaning as Fleet know full well given Hungerford’s win here two weeks ago, but it does place Dulwich under some pressure as they seek to keep in the hunt for seventh place. As things stand, they sit just a point behind St Albans, Havant and Hungerford but have played a game more than all their rivals. And this is the first of three away trips for the Hamlet against sides gunning for play-offs or promotion.

There are no fewer than six former Fleet representatives wearing blue and pink – manager Gavin Rose plus Michael Timlin, Darren McQueen, Andre Blackman, Reise Allassani and Danny Mills. Add in Jack Holland, once of Bromley, and Ronnie Vint who has already played here for Dartford this season and there’s more than a hint of familiarity about the Dulwich side. Fleet, meanwhile, have Ben Chapman and the injured Kieran Monlouis as former Hamlet players in the home dressing room.

Vint and Allassani (returning for his fourth spell at Champion Hill) are recent acquisitions for the visitors, who have also signed Jamaican international midfielder Luca Levee and Weymouth loanee defender Taofiq Olomowewe.

Midfield driving force Timlin has recently returned from injury but without centre-back Holland, Dulwich lost another play-off ‘six-pointer’ at home to Oxford City last Saturday. However, as anyone who witnessed the Champion Hill game against the Fleet, there’s plenty of pace and firepower the visitors can bring to bear, with the likes of McQueen and Mills supplemented by Gio McGregor, Jordan Green, Ibra Sekajja, Chike Kandi and now Allassani too.

The last time supporters watched Dulwich Hamlet play in DA11, the visitors were already relegated with one of the lowest points total in their history. That was way back in April 2001 and although Dulwich did play at the Kuflink Stadium last season, it was without spectators. In that one – Dennis Kutrieb’s first home league game as manager – Rakish Bingham scored his first home goal but 10-man Fleet had to settle for a 1-1 draw.

It’s Dulwich’s seventh visit to the Fleet in all, with their only successes being a pair of 1-0 wins both in 1998.

ONLINE SALES
Our online ticketing sales platform at fleetlive.club has tickets available at reduced price until 12.00pm on matchday. We would advise pre-purchase for both your and our convenience in gaining admission to the ground.

Please also support our post-match live music set from Calli Malpas – all supporters are welcome to join us after the game for this free live entertainment and, from 4.45pm, the bar and music is open to everyone, not just match attendees.

Ed Miller has been Ebbsfleet United's communications manager and programme editor since 2014 and responsible for the club website since 2007. Contact him on ed.miller@eufc.co.uk
PrevPreviousGive it a shot! Fleet team up with Bon Jovi wine brand
NextSigned, sealed and deliveredNext