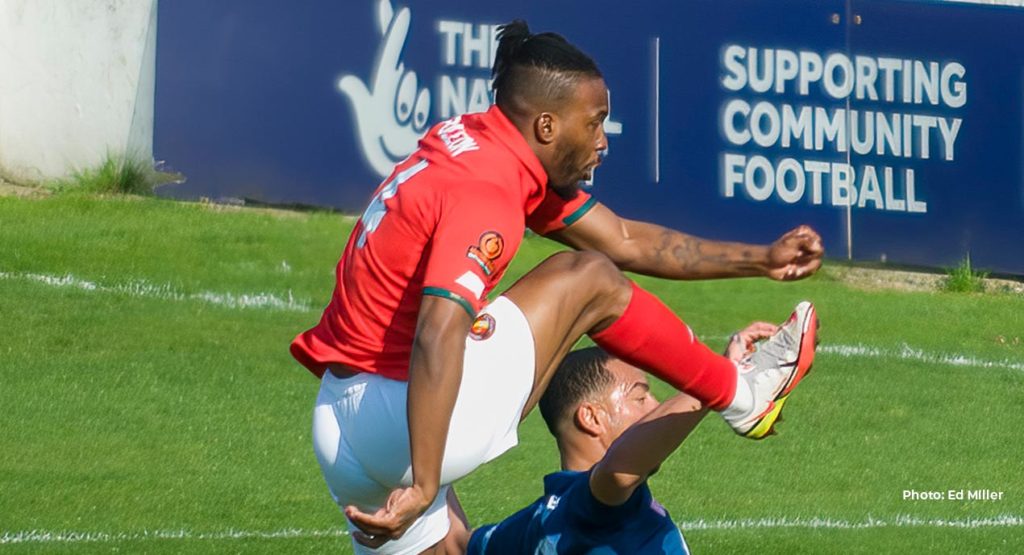 There are three games to go before the regular part of 2021/22 comes to a conclusion and two of those are on successive Saturdays at the Kuflink Stadium!

Another Bank Holiday weekend rolls around for Fleet fans, who will begin the May Day double header with the visit of play-off-chasing Chippenham Town to Kent this Saturday.

And while Fleet might already have secured the very spot that Chippenham are seeking themselves, there can be no let up for either side. Third place and a semi-final home tie is in Fleet’s hands with 270 minutes of football left to play, but with Dartford just a point behind and on equal goal difference, there’s no room to give Chippenham an easy ride this weekend.

And with those 270 minutes of football all to be played in the next eight days – to be followed by the play-offs – it’s another hectic schedule for Dennis Kutrieb’s side. Fans have been cheered by the sight of Greg Cundle and Alfie Egan getting in some running before games of late but their return to action is not yet confirmed and the Fleet boss will likely continue to balance his squad minutes carefully.

Chippenham boast the third-best defensive record in the division – despite conceding five at home, including a Dominic Poleon hat-trick, the last time the clubs met – and they have reignited their play-off hopes with a couple of impressive wins of late. After losing tough matches against the leading pair of Maidstone United and Dorking Wanderers – which saw manager Mike Cook depart in between – wins over Oxford City and Dulwich Hamlet have seen the Bluebirds move to within a point of Havant & Waterlooville and that all-important seventh place. And Chippenham’s final match of the season just happens to be against Havant!

They’ll want to head into that one with as many points and as much chance as possible of overhauling the Hawks, and that will likely mean the necessity for at least a point if not all three at the Kuflink Stadium. New interim boss Gary Horgan will need to utilise a mix of an experienced defence alongside some loanees and youth-team graduates but he has been making the most of that in recent weeks as Chippenham play without fear in these final games.

Striker Jordan Young, signed from Gloucester City, is the chief threat but there are goals through the team and midfielders Alefe Santos and Joe Hanks boast five each.

This will be Chippenham’s third visit to the Fleet, with the two FA competitions last season settled here on penalties – a win apiece in those. The Bluebirds already look to have secured one piece of history this season – their highest finish in 149 years – but it’s the bigger prize of the top seven they come in search of this Saturday.

Form-wise, Chippenham sit 10th with three wins and three defeats from their last six, while Fleet are third thanks to four wins in succession.

Please also support our post-match live music set from Neil and Jamie from 5-7pm after the game… all supporters are welcome to join us after the final whistle for this free live entertainment and, from 4.45pm, the bar and music is open to everyone, not just match attendees.

Ed Miller has been Ebbsfleet United's communications manager and programme editor since 2014 and responsible for the club website since 2007. Contact him on ed.miller@eufc.co.uk
PrevPreviousMarket at the Fleet this Bank Holiday Monday
NextFleet 2-2 Chippenham TownNext