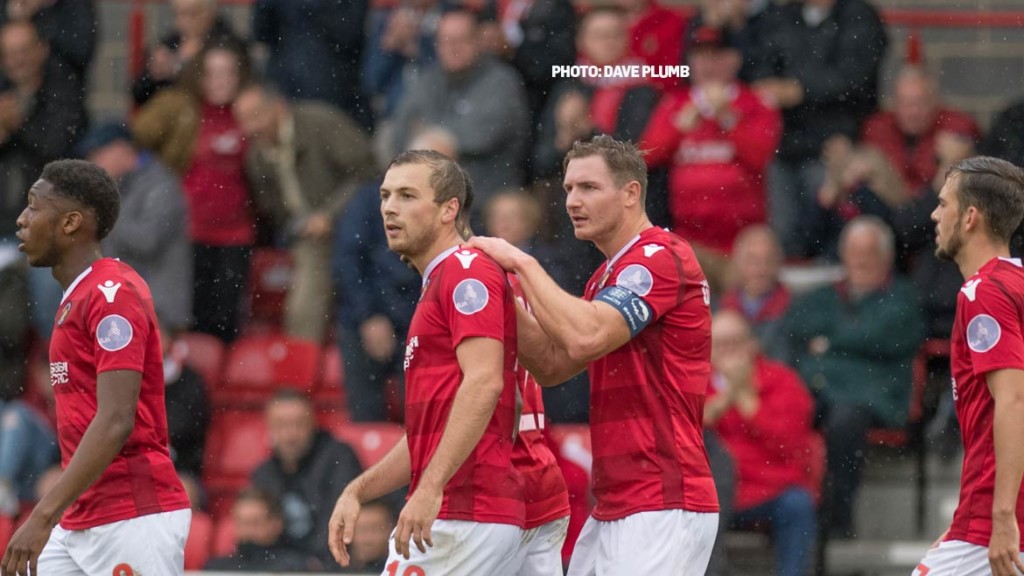 Two teams with plenty to prove go head-to-head for the second match in four days at the Kuflink Stadium this evening. Fresh from a 5-0 mauling at Solihull Moors, Bromley manager Neil Smith has left his players in no doubt that he’s looking for a reaction. And the Fleet can sympathise – like Bromley, they found themselves 4-0 down at half-time the previous weekend. Similarly Daryl McMahon demanded a reaction and while he didn’t quite get the result on Saturday, he saw signs of improvement that he will want hammered home tonight.

The form book might point towards a draw but that’s not a regular occurrence in these fixtures… indeed Fleet and Bromley have shared the spoils on only two occasions in the last 21 meetings. Last season’s fixtures saw a win apiece on home soil over the festive period while the Ravens earned another win in a Kent Senior Cup tie of largely second-string squads.

McMahon will be forced to reshuffle his defence with Kenny Clark serving a one-match suspension. Skipper Dave Winfield showed no initial reaction in his comeback game, so will start if that has remained the case in the days since and a recall for either Sam Magri or Jack King is on the cards depending on the formation deployed.

In his post-match comments, the Fleet boss believed those players who came in on Saturday had done enough to earn a second chance so he may well be resistant to any further changes ahead of Bromley’s visit. He’s expecting Bromley to pose a similar challenge to many of the sides Fleet have encountered at home this season, with big, experienced defenders and pacy attackers threatening on the break.

Bromley have found goals hard to come by of late, having scored in only one of their last four games. They have yet to win on the road and have conceded 15 of 21 goals away from Hayes Lane.

Striker Omar Bugiel was sacrificed early on in the Solihull game while skipper Jack Holland was deployed in an unfamiliar attacking role. Waiting in the wings are Stevenage loanee John Goddard, Colchester loanee Junior Ogedi-Uzokwe and new signing Joan Luque. The Spaniard made his debut as a second-half substitute but he should be full of confidence, having scored 30 goals at Heybridge Swifts last season before a summer move to Lincoln City. Ogedi-Uzokwe is another with plenty of goals behind him, having reached the thirties on loan with Maldon & Tiptree in 2017/18.

Bromley lost some influential players following their FA Trophy Final defeat in May, with Louis Dennis and Josh Rees moving up two divisions and winger Luke Wanadio signing for Aldershot. Other than the loanees previously mentioned, Smith has recruited former Maidstone winger Bobby-Joe Taylor, defender Jake Goodman from Maidenhead and most recently the experienced Sam Wood from Eastleigh.

They’ll be missing influential midfielder Adam Mekki through suspension while former Braintree Town skipper Marc Anthony-Okoye has sat out the last few games with an injury.

Tonight’s game is segregated and Bromley fans should enter through the away turnstiles. All supporters are advised to make use of Ebbsfleet International Car Park C (£3). Thames Way, between the station and the stadium/roundabout, is a designated Clearway and cars parked there run the risk of being ticketed. Please park considerately remembering that there are residential roads around the ground, hence Car Park C being the preferred option.

Ed Miller has been Ebbsfleet United's communications manager and programme editor since 2014 and responsible for the club website since 2007. Contact him on ed.miller@eufc.co.uk
PrevPreviousMixed emotions for Cheek after first goal
NextFleet 1-2 BromleyNext