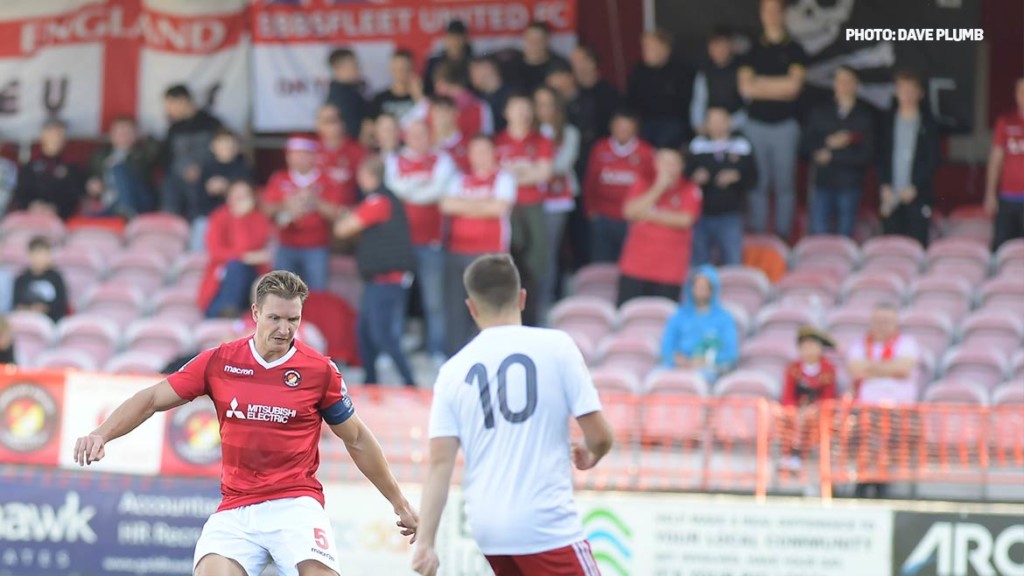 There’s not a cigarette paper between the two sides contesting Saturday’s Vanarama National League game at the Kuflink Stadium – both are eager for a win to arrest some poor form, both are facing restructuring processes off the pitch and both have four wins apiece at Stonebridge Road in head-to-head contests. Add to that the matter of just a single point separating them in the league table and Fleet versus Barrow looks too close to call.

The Bluebirds are a much-changed side from the one the Fleet beat 1-0 in April en route to the play-offs. Just one member of that Barrow team is likely to be in the team at the Kuflink Stadium and Daryl McMahon is expecting a younger, brighter opposition.

“They play some good football,” he said. “They’re younger this year as well. They lost in midweek to Harrogate and I’ll speak to Simon [Weaver] at Harrogate about them but they’re a decent side. We need to build on our last two performances and add two more points to the single points we’ve been picking up.”

Andy Drury and Dean Rance were hopeful of a return to action after missing out through injuries sustained in training recently, while Luke Coulson’s substitution was precautionary after he pulled up with cramp on 80 minutes against Maidstone.

Barrow are in a poor run of form, having lost four of their last five games and exited the Emirates FA Cup at National League North side Chorley. Manager Ian Evatt has accused them of being “mentally too weak” when they concede and certainly Tuesday night’s defeat at Harrogate turned on the five-minute spell in which Barrow, 1-0 up at the time, saw three goals get past them.

This is Evatt’s first permanent managerial job, having attempted to salvage Chesterfield’s league status last season on a caretaker basis. He has had to rebuild the squad entirely following Ady Pennock’s departure in May and the Bluebirds currently have one of the larger squads in the division. Much of that is due to a lengthy injury list that includes club captain Josh Granite, strikers Rhys Taylor, Jacob Blyth and Nathan Waterston plus defender Matt Elsdon.

Despite the blow to his forward options, those Evatt does have at his disposal haven’t disappointed with teenage Sheffield United loanee Tyler Smith on seven for the season and former Colwyn Bay top scorer Jack Hindle on a similar tally.

Barrow’s only win on the road this season has come in Kent, beating Dover at Crabble, but otherwise their away record resembles Fleet’s home form – that points to the first ever draw in eight meetings between the sides at Stonebridge Road but neither will be in the mood to settle for a point at this stage of their season.

The match is not segregated. Car-parking is available at Ebbsfleet International Station Car Park C for £3. The club cannot emphasise more strongly that this is the best option for parking near the stadium. Local businesses are continuing to contact us to warn they will clamp cars parked on or blocking private property. Drivers should not block areas around Watling Tyres, In-Car Wash (Grove Road), the Ebbsfleet Business Park and the Lower Road Industrial Estate. Furthermore, drivers are warned that parking on the Thames Way clearway near the roundabout runs the risk of being ticketed.

Ed Miller has been Ebbsfleet United's communications manager and programme editor since 2014 and responsible for the club website since 2007. Contact him on ed.miller@eufc.co.uk
PrevPrevious“Changing room will keep being positive” – Macca
NextFleet 1-0 BarrowNext