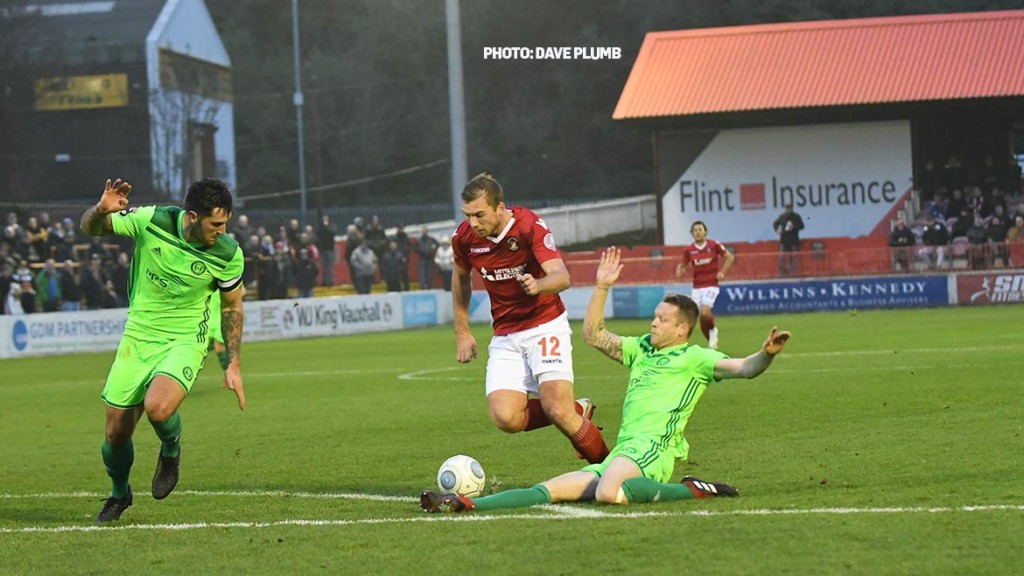 Things have definitely been a lot worse for both Fleet and visitors Barnet this season. But with Saturday’s contestants on an upward curve, there’s definitely the prospect of an intriguing Vanarama National League clash ahead.

It’s Barnet’s first visit to the Fleet for 14 years when, captained by our current assistant manager Ian Hendon, the champions-to-be won 3-1. Such success seemed a long way away for Barnet fans when Fleet triumphed 3-0 at The Hive earlier this season but John Still has since masterminded a five-match winning streak that saw the Bees climb out of the relegation positions to as high as ninth place. And with the prospect of an FA Cup Third Round ahead, better times are only around the corner for Barnet.

Fleet boss Garry Hill certainly seems to think so and with another very experienced and successful manager in the opposite dugout on Saturday, he believes Still’s Barnet could spring a surprise in 2019.

“They’re a very good side,” Hill told eufc.co.uk. “I said to our players before the Aldershot game that there were two sides potentially who were capable of making a run in the second half of the season into the play-offs, one’s Ebbsfleet and two is Barnet. John Still is a very experienced, quality manager. He’s got a good squad at his disposal but we’re working hard and playing well, so it’ll certainly be a very interesting game.”

Self-belief is certainly key to the Hill-Hendon philosophy at the moment and the Fleet boss is appreciative of his players buying into it from the start. “I’m very pleased with the players and management squad in respect of the way we’ve gone to work. The pleasing factor is that everyone is working hard and well together and there’s a lot of freshness around the football club. What we mustn’t do is get carried away and we need to keep our feet on the ground. All clubs on the playing side through the season have good and bad spells. But what we’re trying to do is move forward in a new structure and everyone’s aware of that.”

There were more reminders of the new structure for Fleet fans yesterday as Luke Coulson departed the club for Bromley. Hill is very mindful of the need to reduce the numbers without affecting the quality of the squad he can deploy on matchdays and he advises that it’s all about finding a balance.

“Irrespective of numbers being reduced, I also think it doesn’t make us weaker – and that’s no disrespect to players who have moved on,” he said. “When I came in and looked at the squad of players and the financial restructuring job ahead of us, the important thing was to keep a core and achieve a balanced squad. The owner has been very supportive, he wants us to be competitive but without the surplus we have had. It has been too many and we work closely with the chairman and with Dave Archer and we all understand what we want to do. Losing players, I don’t want to look on that as a hindrance or a problem, as long as we stay clear of injuries. I know we have a lot of games in the Christmas period and the squad is on the thin side but I’m relaxed with it. We don’t need to go out and sign players right now for the sake of it to make up numbers.”

The Fleet manager also appealed to supporters to see beyond the short-term departures and view the bigger picture.

“I wish the players who have moved on all the best, I genuinely do,” he said. “I’ve been open and honest with them but I’ve got to look after the football club, not risk it. We should be looking forward. Here at the club we’re very positive and I’ve seen positive signs at training amongst the playing squad. We’ve change the method of how we approach games and how we play football, the way we’re setting up and the players look like they’re enjoying it and have bought into it.

“But every football club needs the supporters behind them. They’re a massive part of it and I said that last week. I make sure whether you’re in the eleven or you’re one of the subs, the physio, everyone goes and acknowledges the home fans at home and the travelling fans away. You don’t do that just because you’ve got a good result. It has to happen both ways, irrespective of results, that’s a massive part of connecting us and you. I hope fans appreciate it and appreciate why things are happening as they are. All I ask of this squad right now is to be competitive. And if we can get our strongest team out on the park, we’re a match for anyone at the moment.”

With Dean Rance fit again, the Fleet medical staff continue to assess Dave Winfield and Andy Drury, though Hill had a full complement of playing staff in training by the end of the week. And he knows the glut of games in the next five weeks could be crucial to the Fleet’s season, starting with the win at Aldershot last week.

“I have a nice dilemma at the moment,” Hill said, “where it’s a case of whoever’s got the shirt is in the pole position. They’ve made a strong claim to start the next game. It’s a crucial month and we started it last week – now we have six or seven games, the FA Trophy, Christmas and New Year’s Day, it’s a massive part of the season. We were sitting in 16th and 11 points behind the play-offs and now we’re in an area of encouragement but let’s not get carried away. Football has that habit of turning good spells into bad ones and back again, but I think we’ve brightened the winter days up for a lot of people so far.”

It’s Hill v Still on Saturday and the Barnet boss has had his ups and downs this term. Faced with plenty of bad feeling since his side lost 3-0 at home to the Fleet in August and a serious injury list, the former Dagenham manager has quietly propelled Barnet back up the table. Their recent defeat to Maidstone aside, Barnet have generally lost games to play-off and promotion hopefuls only and their run to the Third Round of the FA Cup has also put a smile back on faces at The Hive.

With a huge squad at his disposal, 10 of which are on loan at other clubs, Still has nonetheless found it difficult to field his first-choice XI. Skipper Callum Reynolds, Harry Taylor and Byron Harrison have returned but there are still players including Andre Boucaud, Simeon Akinola, Ricardo Santos and Mauro Vilhete injured. The Bees chairman bemoaned recently the fact the club had a more experienced lineup injured than the fit eleven they could put out on the field.

Still has added firepower in recent weeks with the incoming loan of Manny Duku from Cheltenham Town and the signing of Mohamed Bettamer from Braintree Town so it will likely be a very much changed Barnet side at the Kuflink Stadium from the one that fell to the Fleet in August.

Like ourselves, Barnet have a better record on their travels, having picked up five away wins this season and indeed their last three victories have come on the road, at Barrow, Hartlepool and most impressively at Bristol Rovers in the FA Cup.

Still and many of his players will, of course, know plenty about Michael Cheek and Corey Whitely. Both played under him at Dagenham last season and the Bees side has a spine of former Daggers running through it, from goalkeeper Mark Cousins through Craig Robson, Charlee Adams, Dan Sparkes and the injured Boucaud.

• The match is not segregated. Car-parking is available at Ebbsfleet International Station Car Park C for £3, the best option for parking near the stadium. Drivers should not block areas around Watling Tyres, In-Car Wash (Grove Road), the Ebbsfleet Business Park and the Lower Road Industrial Estate. Furthermore, drivers are warned that parking on the Thames Way clearway near the roundabout runs the risk of being ticketed.

Ed Miller has been Ebbsfleet United's communications manager and programme editor since 2014 and responsible for the club website since 2007. Contact him on ed.miller@eufc.co.uk
PrevPreviousLuke leaves for Bromley
NextFleet 1-0 BarnetNext