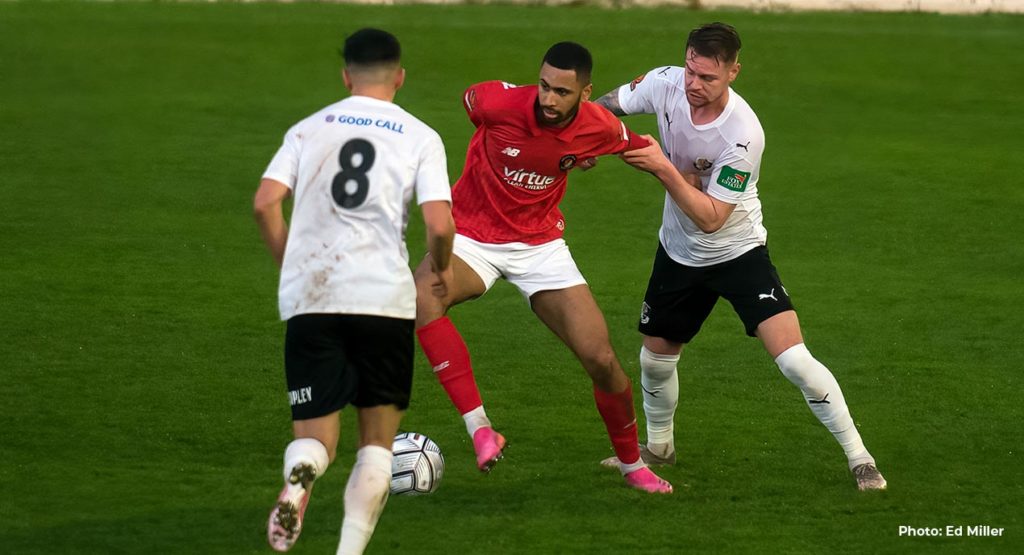 Fleet’s February gets under way at Princes Park this evening and if the red half of North Kent can start this month as they started the last – with victory over Dartford – that would record a 12-point haul from six games and provide the perfect springboard into the final months of the season.

The Darts, of course, will be on a revenge mission and – even leaving aside the usual derby desires for victory – must start to turn recent poor form around to maintain their own promotion push as well as leapfrogging the Fleet in the table.

And this North Kent derby, rescheduled after the postponement of the original Boxing Day fixture, is something of a first as never before have the Fleet and Dartford met in a league game during the month of February.

“We are prepared for Dartford,” said Dennis Kutrieb, having experienced a win witnessed by the biggest home crowd he’s managed in front of last time out. “I’m looking forward to it, it’s a great game and a great derby – we could see that here at home, it was a fantastic atmosphere.

“Everyone’s ready to go, our players are ready to go and our fans are ready to go. And hopefully we have a few more than the 300 allowed [at Maidstone] last Tuesday! I’m pretty confident we will have a big support at Dartford and that’s what the boys need at the moment. We don’t have the rub of the green, still not [despite beating Hampton], and we just need to work hard. That’s what the boys always do and why they deserve the support from the fans.”

There are always two schools of thought when it comes to derby games – on the one hand, managers want players to treat them as every other match, with carefully observed gameplans and cool, calm heads. On the other hand, everyone wants to see the raw passion and love for the shirt that comes with squaring up – in footballing terms, of course! – to your rivals on the pitch.

“Yes, it’s just three points if you win,” said Kutrieb. “But we know what it means to everyone. It’s always good, always intense to play such important games as these and this is why we want to all play in these games.”

The Fleet boss added goalkeeper Louie Moulden to his squad on the eve of the match, the England U20 and Wolves goalkeeper having previous experience at this level with Gloucester City. Sefa Kahraman remains suspended with the second of his bans so Fleet will make a call on available defenders ahead of kick-off – while Elliott Romain could see action against his former club, depending on if he’s chosen ahead of or alongside Dominic Poleon.

Dartford have a new loan signing too, former Walsall defender Kory Roberts having joined from Bromley last week. Roberts slots into a back line alongside Tom Bonner that has recently lost the services of long-term Dartford academy graduate Ronnie Vint. He played in the New Year game at Stonebridge Road but has since departed for Dulwich – and with Josh Hill and Connor Essam both injured, it seems like Roberts will feature again having made his debut on Saturday.

That game was a 3-2 win at Tonbridge Angels, marking Dartford’s first victory in six league games. Winger Danny Leonard, who scored twice in seven first-half minutes, continued his comeback after a month out while Jack Jebb fired home another set-piece, a weapon Fleet will need to be prepared for tonight.

Although Dartford’s form has been patchy of late, they remain quite the obstacle at home. Steve King’s side are 15 games unbeaten at Princes Park in all competitions this season and Fleet will hope to end the Darts’ bid for a record of 18 unbeaten at home set way back in 1908/09 (albeit on a different ground).

In addition to Vint’s departure, winger Luke Wanadio has also left Princes Park for Folkestone Invicta on loan while midfielder Noor Husin was snapped up by Southend United. There will inevitably be a few changes in personnel for Dartford from the side that lost at the Kuflink Stadium, with the inclusion of QPR loanee Kai Woolard-Innocent (who played against us for Eastbourne) likely plus returns to the starting eleven for Keiran Murtagh and George Porter.

Tickets for tonight’s match can be bought online from Dartford’s ticketing platform here. You can also pay at the ground this evening, with the match unsegregated, as it was at the Kuflink Stadium a month ago.

Ed Miller has been Ebbsfleet United's communications manager and programme editor since 2014 and responsible for the club website since 2007. Contact him on ed.miller@eufc.co.uk
PrevPreviousLoanee Louie fits the Fleet mould
NextDartford 1-0 FleetNext