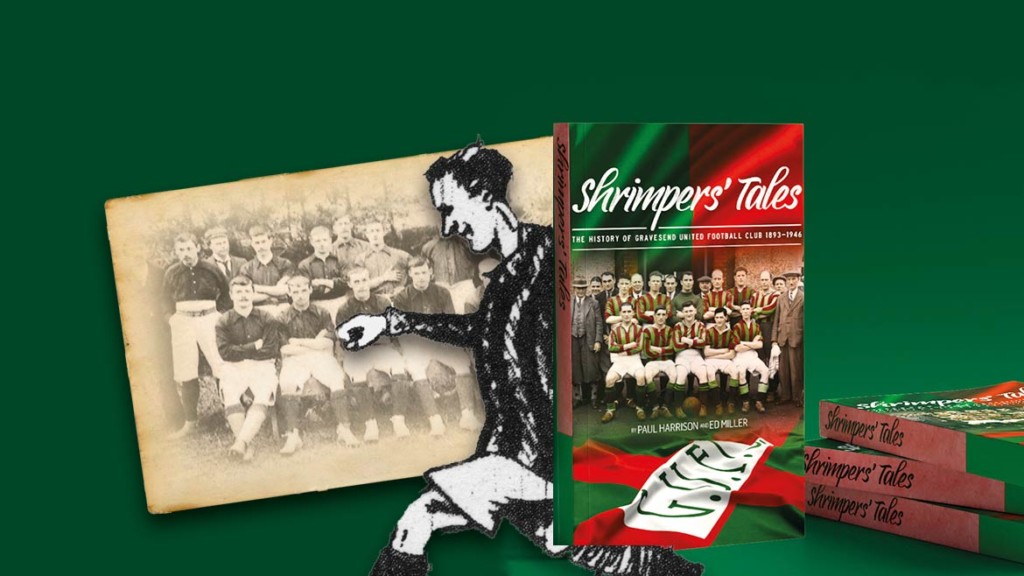 Copies of Shrimpers’ Tales have now arrived in stock and are available for purchase from the club shop. For supporters who pre-ordered and requested collection from the club shop, they will be ready for pick-up at the shop before Saturday’s game v Leyton Orient. Books will also be mailed Friday to those who opted for postage.

The book celebrates the 125th anniversary of the founding of Gravesend United – one of the two ancestor clubs of Ebbsfleet United.

The companion story to 2015’s Set In Concrete: The History of Northfleet United, the new publication Shrimpers’ Tales (so-called because of Gravesend’s nickname) is the final piece of the jigsaw in the history of our club and the first ever chronicle of Gravesend United.

The project is entirely self-funded by authors Paul Harrison and Ed Miller and you can purchase online for £12.99 + P&P (or opt to pick up in the club shop).

Simply go to the dedicated website at the link here or below to purchase now. You can also buy a copy of Set In Concrete, the Northfleet United book, for only £5 when bought online with Shrimpers’ Tales.

The book is in Royal format size (234x156mm), is priced at £12.99 and contains 136 fully illustrated pages, covering the early foundations of football in the town during the 1880s to the merger of Gravesend FC and Ormonde FC that gave birth to Gravesend United in 1893. Season-by-season, we look at how the Shrimpers moved from Gravesend FC’s ground at the Bat & Ball to the Overcliffe and then on to Pelham Road (now Mayfield Grammar School) in the years leading up to the First World War. In their Southern League days, Gravesend played against clubs including Tottenham, West Ham and Southampton on a level footing, boasting a wealth of talent from the Victorian era of the game.

The book moves through the tumultuous years of the First World War, in which five former Gravesend players that we know of were killed and the club itself died off for 14 years following the Armistice. We then retrace its steps from resurrection in 1932, all the way through the Second World War into 1945/46 and the moves to create our current club. Throughout we take an in-depth look at the players and personalities along the way that shaped the club. Without Gravesend United, there would never have been a Gravesend & Northfleet and in consequence a modern-day Ebbsfleet United. We owe a great debt to the Shrimpers and this, finally, is their story.

Ed Miller has been Ebbsfleet United's communications manager and programme editor since 2014 and responsible for the club website since 2007. Contact him on ed.miller@eufc.co.uk
PrevPreviousCheek lands player of the month
NextPREVIEW: Leyton OrientNext