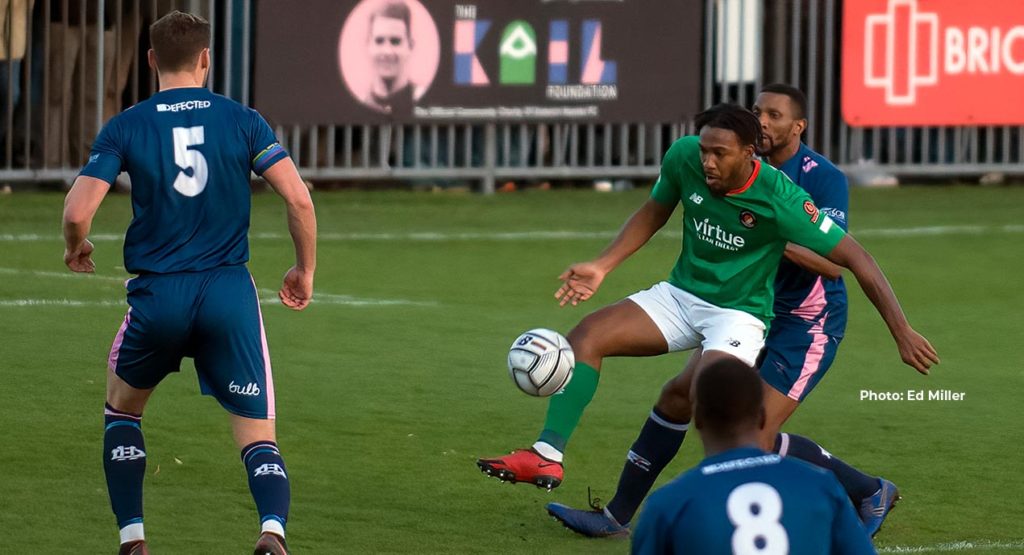 Dennis Kutrieb is keen to get some of his injured personnel back for the four home games in Fleet’s next five fixtures after his side were punished by Dulwich Hamlet’s second-half performance yesterday.

Joe Martin joined Greg Cundle and Lee Martin on the sidelines after his injury in midweek, while Fleet will be missing Tobi Adebayo-Rowling through suspension for three matches. It’s swings and roundabouts for the manager on that front, with Adam Mekki and Christian N’Guessan returning to action but Kutrieb hopes more of his side will be available in a week’s time against Concord Rangers.

“I’m happy about [midweek off],” he told BBC Radio Kent’s Charles Webster, “because anyone who saw the lineup saw that many players are missing at the moment. We have seven days now and many players will be back next week so our shape will definitely look different next Saturday. That’s always good for me to have more options on the pitch and of course it’s a good situation to work for seven days when you’ve got a big Christmas programme ahead.

“You’re going to need all those players available and I’m happy if I have to make tough [selection] decisions [rather than it being] like they more or less have to play because they are fit. You could see Christian is back, Mekki is back. Greg Cundle, even Joe Martin, it’s not a big thing, Lee Martin too, so I’m happy that we have several more days to work and we’ll definitely have another lineup next week.”

Fleet coped well in the first-half, despite a somewhat enforced lineup, but the second belonged to Dulwich as they clinically despatched their four shots on target after the break. And Kutrieb thought recent form perhaps preyed on his players’ minds.

“Dulwich were good when they came out of half time,” he said. “Straight away, they had two or three corners and caused us little problems. They had a few little chances and then you start to get a little bit nervous as a player because you know you can lose – if you have in your head that you can lose something, it’s always a problem. When you start to think [like that], normally you have lost straight away because that’s exactly the wrong mindset. When you have the feeling you can win something, that’s a good setup for your mind because you always need to think you can win today. And I think that was in the head straight away after the first few minutes in the second half and they couldn’t react in the right way because they get more and more… ‘nervous’ is not the right word, I would probably say more insecure and that never helps you in a game.”

After the Fleet were denied strong penalty claims in midweek, Kutrieb considered two more penalty decisions in either half at Dulwich certainly didn’t help the visitors’ cause, with Ben Chapman sent sprawling after 10 minutes and Alfie Egan felled from behind in the second half.

“When you lose 5-2 you feel a little bit embarrassed to talk about the referees,” Kutrieb said. “But I can’t understand in the first-half, it’s a clear penalty, the second-half a clear penalty, we don’t get anything but booked three times. It’s tough for me to talk about it because I don’t want to talk about it but everyone who knows football knows it makes a great impact in the game. But we have to regroup now, we have to shake it off. I said a few weeks ago we have tough weeks in front of us, with a few injuries. Next week the team will look a little bit different but for now we have to take it.

“Week in, week out, you have decisions which you have to get on with but I know players get affected from it. I was a player as well so I know how you feel when you don’t get the next penalty, when you don’t get the 50/50 but at the end of the day you can’t lose the game like we lost. In the first-half there was no [penalty] decision for us but we showed we can be resistant, that we can take the lead, that we can be 2-1 and perhaps maybe 3-1 up, so it’s not time for finding excuses, but it does have an impact.

“For spectators it was a great game of football, but not in our way. The first-half was OK but you could see even then it was a very tight game from both sides, good free kicks and great chances, both hit the crossbar but second-half they put much pressure on us and they played a great game of course.

“I can’t say it was a 5-2 game, it was a very tight game and end to end. It was good quality from both sides from a technical point of view. Not everything was bad today but in some areas and for some situations, it was a little bit more shaky. That’s normal if you have two losses in a row and then the opponent puts pressure on you. But we will work on that. We don’t lose our heads when we when we win all the games, I never said ‘Now we are in the mix and we are a great team, whatever’. I said so far it’s good.

“But now it’s definitely the other way around, we lost the games but not everything was bad so we keep on working and we get a few injured players back and then our shape looks a little bit different.”

Ed Miller has been Ebbsfleet United's communications manager and programme editor since 2014 and responsible for the club website since 2007. Contact him on ed.miller@eufc.co.uk
PrevPreviousDulwich Hamlet 5-2 Fleet
NextBath game moved to blank SaturdayNext