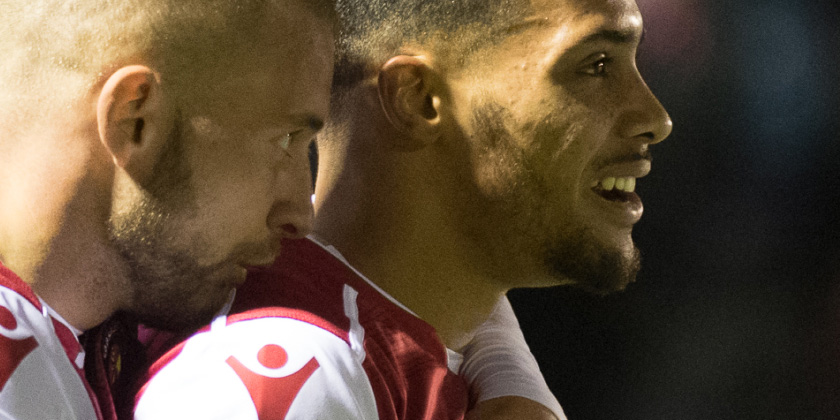 Playing with a smile on our faces…

Daryl McMahon may have the biggest match of the season coming up on Saturday but you wouldn’t know it such is the calm authority with which he and his squad are approaching each game. After Fleet’s latest win – their eighth in an unbeaten run of 11 games – the boss insists his players are enjoying themselves, free of pressure and concern.

“We’ve been here before as a group in these situations where teams can get tense,” he told Charles Webster. “We’re not tense, you can see from the first 45 minutes that we’re enjoying our football. The lads are playing with a smile on their face, they’re confident, they believe in each other. Long may it continue.”

If it does continue much longer, Fleet could yet extend their season beyond April 28th but McMahon remains true to his maxim of one-game-at-a-time.

“We won’t get carried away, there’s loads we have to improve on and work on but we’re sitting in a nice position now and we’ve got a massive game on Saturday,” he said. “We’re playing well. In the first half today, maybe not the second, we were excellent. We seem to marry up real quality and real desire to keep clean sheets and that’s good. But there’s loads of football to be played, we’ve seen it so many times where anything can happen and we’re not getting carried away. It’s not how we work and we’ll get ourselves ready for Sutton.”

The old adage about timing a late burst for the top positions couldn’t be more true than in Fleet’s case these last two months but the manager was reluctant to accept it’s just been down to good timing.

“I don’t think we’ve timed anything,” he said. “It’s an accumulation of players playing well. When you’ve got 14 players playing really, really well, that breeds confidence in the group. We’ve got a settled group because we’ve only got 17, it’s less to choose from. The back four’s been terrific and Lawrie Wilson, he probably didn’t have his best spell, he’s not played a lot of football and the last two games he’s been absolutely outstanding. I can go back to so many games over three years when my teams have always had good fighting spirit and good belief – that gets swept under the carpet quite a lot.”

For all the positivity flowing through the Fleet camp, however, McMahon believes there are areas in which his side can improve further and he was disappointed they drew a blank in the first half at the Silverlake Stadium.

“The first 45 we could have been out of sight the amount of opportunities we had,” he said. “We were really sloppy, not ruthless and clinical enough in front of goal. We really dominated that first half in all areas of the pitch apart from that. We worked the ball into areas and got good control.

“It’s not the first time it’s happened. On numerous occasions, we do start fast and we’ve had another big opportunity after two minutes that we don’t take. We’ve got to take them. I said if I was one of our centre halves or Ash at half-time, I’d be fuming. We should be three up and you’re not and Nathan takes you out of jail with a penalty save when really the game should have been over.”

The Fleet boss wasn’t convinced Eastleigh should have been awarded the penalty on first viewing. “I didn’t think it was, I’ll see it again. When you only see it live, it’s difficult to see. Lawrie [Wilson] said it wasn’t, [their player] just went over. But they happen.”

Ashmore’s save rescued Fleet at a point in the game when Eastleigh had just begun to gain a head of steam but even had Paul McCallum converted his spot kick, McMahon always thought his side had more in them.

“I always believe we’ve got a goal in us and we’ve got the best goalkeeper in the division,” he said. “I don’t know how many penalty saves he has now. They believe in themselves and we’ve seen it again today.

“We haven’t scored enough from set pieces when you look at the power in the side we’ve actually got. And a lot of it’s not down to the ball, it’s the movement in the second phase. We’ve spoken about it a lot as something we need to improve on. But it’s about time one of the centre halves scored. It was a great header and a great ball from Powell and he came on and probed and kept the ball for us. He made a big difference to our play. I thought it was what we deserved over the course of the game. ”