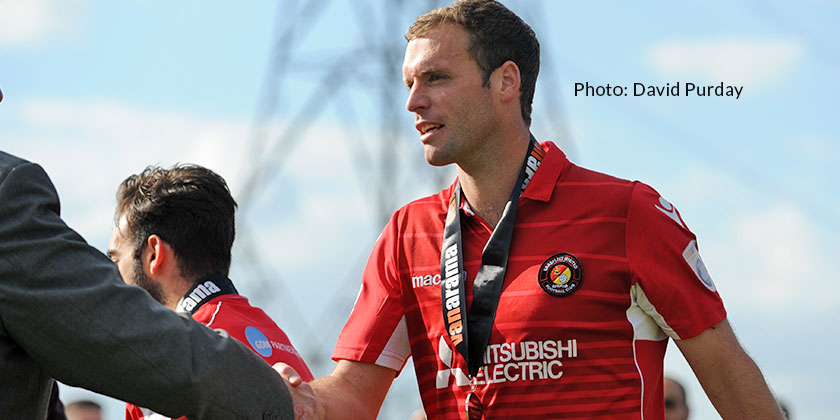 Andy Drury has been playing through the pain barrier for two months as he sought to get the club over the line and promoted to the National League.

An injury which forced him off at St Albans in the second half of Fleet’s 3-0 win there back in March was, at the time, a cause for concern for all supporters who witnessed it – and Drury revealed that he’s been carrying a tendon and bone-bruising problem ever since.

“I got it from the game at St Albans, I couldn’t walk for a few days,” Drury told BBC Radio Kent’s Charles Webster. “I’ve seen the specialist and there’s not a great deal I can do with it, I’ve just got to rest it so hopefully over the summer I can rest it. I pulled my groin on Saturday after about 15 minutes as well so I can rest that and hopefully be fine for pre-season.”

Drury’s contribution has been immense since his move to rejoin the Fleet in early December but there can be no disputing the fact that his first-time cross for Darren McQueen’s winner on Saturday was the standout moment. Yet the midfielder was only there to do it because he’d taken painkillers before every match over the past two months.

“I haven’t had the opportunity to rest it so it’ll be nice to get it sorted,” Drury said. “[I’ve been taking] really strong painkillers for the last few months since that game. I’m happy, we’ve got promoted and I played every single game since then.

“I shouldn’t have been playing, I should have rested it for a few weeks and then I’d have been pain-free and playing but the opportunity never really came up and I just got through it.”

And Drury revealed his motivation was repaying the man who brought him back to Stonebridge Road. “The faith Daryl put in me by signing me at the time, I wanted to do it for him as I knew what he went through last year,” Drury explained. “I think he’s a very, very good manager, especially at this level and I think he’ll go a hell of way in the game as a manager. And also I wanted to get promoted myself and for the fans as well.”

Drury has won honours with Lewes and Stevenage in the past but says this season’s achievements are up there with his best moments in football.

“This is better, this is a bigger club than Lewes,” Drury said. “The way we’ve done it through the play-offs with an extra few games, the atmosphere as well, on the day made it much better. If only this place was a bit bigger! In a couple of years’ time, hopefully we can get up from the [National League] as well and the ground will be bigger and it will be an even better occasion. Times like that don’t come around very often, I’ve had three in 14 or 15 years. You’ve got to enjoy it while it’s there.”

And the midfielder revealed, despite his year-long claims that the Fleet were going up, that he did harbour one or two worries after his side went a goal and a man down.

“I thought, we’re in a bit of bother here,” he admitted. “But the thing is we’ve got players that even from set pieces, you’ve always got that chance even though you’re down to 10 men, you can always – with the quality we’ve got – nick a goal. And luckily we nicked two but I think we deserved it. We played a lot better football than them. It can be quite tricky when you’re a man up, especially when you are 1-0 up because you don’t know what to do, you think shall we keep going for it or sit back a little bit. And we seized upon it.

“It was more relief that we’d done it because we’d been expected to do it and I’ve  said loads of times that we’d do it as well. So on the day it was actual relief but now it’s happened, to get promoted is a good feeling.”

Listen to full interview below.

Ed Miller has been Ebbsfleet United's communications manager and programme editor since 2014 and responsible for the club website since 2007. Contact him on ed.miller@eufc.co.uk
PrevPreviousChris Pilkinton’s funeral details
NextGravesend Messenger’s nine pages of Fleet coverage!Next