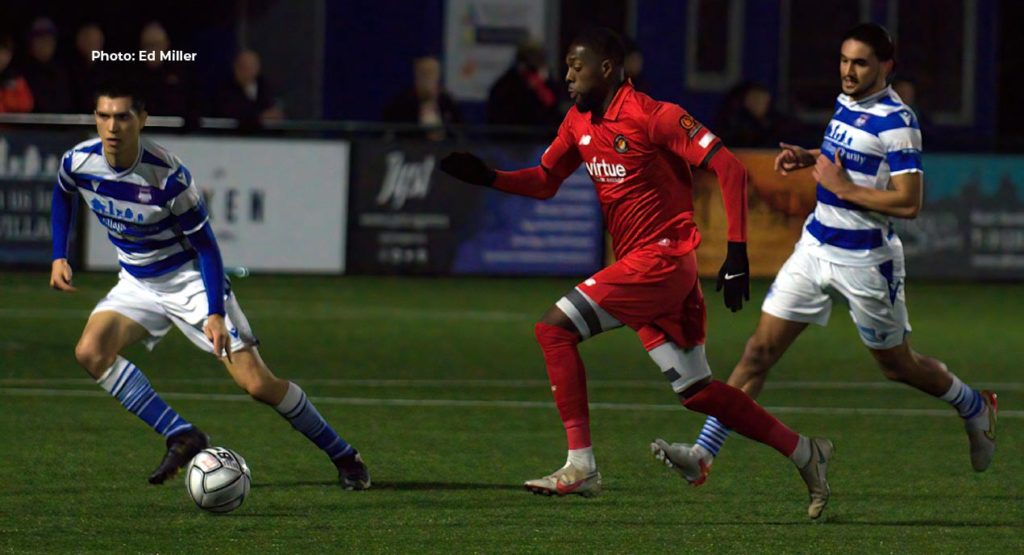 Oxford City took the points courtesy of a sublime strike on the cusp of half-time – but Fleet will wonder how they didn’t take all three points, never mind one, after enjoying the better of the first period and completely dominating the second to the extent that the home side barely caught sight of Chris Haigh’s goal.

Dennis Kutrieb preferred not to blame ill luck after the final whistle, admitting the scoreline was all Oxford City will care about with the three points in the bag, but in truth Fleet’s performance was a step up on the past two games and there was little good fortune falling their way throughout this 90 minutes.

To cap the defeat, Tobi Adebayo-Rowling was issued with a straight red late on after an argument in the corner of the pitch with the incident not immediately clear as to why it deserved the sending-off. And there was some claim for a penalty, too, after Dominic Poleon went over in the box.

As per his post-match interview at Cray, the Fleet boss promised changes and brought back Joe Martin, Chris Solly, Alfie Egan, Rakish Bingham and Poleon.

For Oxford, former Fleet defender Charlie Rowan was suspended after his sending-off in their 4-1 home defeat to St Albans in the FA Trophy at the weekend.

With both sides licking wounds from their Trophy exits but desperate for the three points, it was an unsurprisingly cagey opening, Fleet forcing an early corner and Oxford sending a free-kick over.

The first chance fell to top scorer Joe Iaciofano who whipped a fine shot just high of the Fleet crossbar. And he was again free to get another shot away, this time on target but Haigh was behind it.

Fleet thought they’d edged ahead on 12 minutes when Chris Solly released Will Wood, whose run forward eventually saw Egan thread a pass through for Poleon to tuck away but the offside flag was raised.

A period of solid and promising Fleet possession around the quarter-hour mark saw Adebayo-Rowling fire off a great effort from distance towards the top right corner that Ben Dudzinski palmed away to safety. Back came Oxford and former Southend man Harry Kyprianou teased Wood down the Fleet left before curling in a shot that had Haigh diving low to gather.

Wood just fell short of pulling the trigger from an excellent chest down by Bingham on 25 minutes and that was followed up by Ben Chapman’s well-aimed shot from outside the box but it was always heading over the crossbar. Another effort flew high when Wood was on to Poleon’s clever pass along the floor as Fleet edged possession while always being wary of Oxford’s quick movements forward.

Fleet restricted Oxford’s chances to a minimum as the half wore on with only Iaciofano’s pace occasionally threatening, but while enjoying plenty of the ball they couldn’t put the home goalkeeper under a great deal of pressure. Dudzinski did have to get down well to Joe Martin’s 39th minute free-kick while Haigh had to be quick at the other end to cling on to Reece Fleet’s effort across the box.

But against the run of play Oxford took the lead on the stroke of half-time. A free-kick from the right was curled in and cleared but skipper Fleet met it 25 yards out and caught the loose ball sweetly, sending an unstoppable shot beyond Haigh.

Fleet started the second-half strongly, keeping the ball away from the chasing Oxford pack and they must have wondered where their luck had departed to when Bingham twisted and turned on 49 minutes before firing in a brilliant shot that smacked off the underside of the bar, perhaps with the help of a fingertip from Dudzinski. Poleon got his head to the rebound but the ball bounced high and he could only steer it over.

The visitors continued to dictate the pace and Poleon and Adebayo-Rowling weren’t far away from Egan’s delivery on 54 minutes but Dudzinski did just about enough to prevent either of them getting a firm touch. Kyprianou and Dan Matsuzaka both went into the book in quick succession for pulling Egan back in midfield with Oxford’s one chance was restricted to an adventurous cross that Adebayo-Rowling headed away from the far post.

It just wasn’t happening for the Fleet, never better illustrated than when Poleon took on Egan’s pass into the box, beat three players but saw his effort hit the side netting as the hour mark passed. And the same luck applied moments later when Chapman’s mazy run was sidefooted behind his own goal via the post by Matsuzaka, the defender not really too sure where his instinctive clearance was heading.

An Egan corner on 72 minutes bounced off an Oxford heel to fly behind and the ball continued to ping around the home box but the goal led a charmed life with a frustrated Fleet front line unable to get past a wall of hooped shirts.

Oxford had precisely nothing going forward all through the second half but they defended astutely and Fleet’s frustrations came to a head when a bust-up in the corner saw Adebayo-Rowling seemingly react to a poor challenge and the referee opted for a straight red card to him but just a yellow for his protagonist.

And still with 10 men Fleet tried. Egan walked his way into the box and placed a ball along the line but that ran clear and to sum up the evening a deep cross to the far post to in time added on was sent over Dudzinski’s goal by Poleon as Fleet fans prepared to celebrate. Instead they left wondering how on earth their side hadn’t breached the Oxford back line as the home team used up a month’s worth of good fortune in one 90 minutes.

Ed Miller has been Ebbsfleet United's communications manager and programme editor since 2014 and responsible for the club website since 2007. Contact him on ed.miller@eufc.co.uk
PrevPreviousPreview: Fleet head for midweek City break
NextDominance in defeat for FleetNext