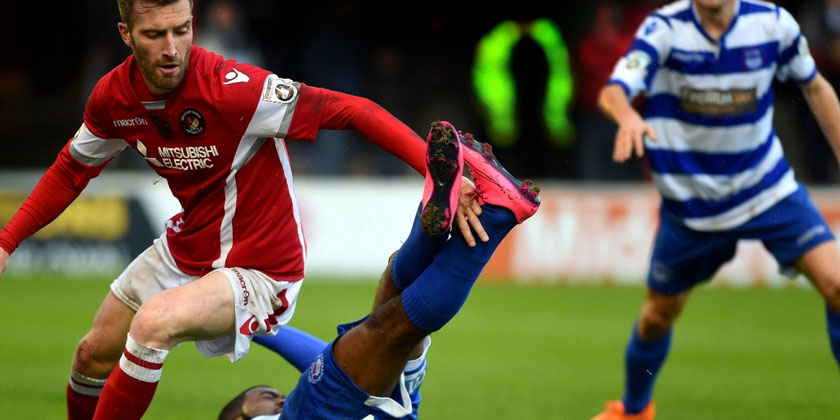 Late goals seem to be a feature of this Vanarama National League South season and this afternoon’s match was no different with last-gasp conversions for both Oxford City and Maidstone United being a reversal of Fleet’s position of two weeks ago. And with dismissals for Oxford City’s Reece Fleet as well as Danny Kedwell, plus a flurry of yellow cards, there was certainly plenty to debate at Marsh Lane.

Fleet made just one change, Matt Godden back in place of new father Jordan Parkes who was absent for obvious reasons. With such an attacking line-up, Fleet almost took the lead on five minutes. A spell of Oxford pressure was cleared and Anthony Cook hared upfield with the ball at his feet, laying a perfect delivery into Aaron McLean but the former Barnet striker’s shot was well blocked by goalkeeper Laurie Walker.

The first booking of the afternoon arrived on eight minutes when Jon Arzamendi upended Cook 25 yards out, with the Fleet winger proving a slippery customer on the right flank, while City’s best chance was a Bradley Bubb drive that deflected wildly away for a corner with Brandon Hall unsure of the flight path.

Fleet took the lead on 18 minutes when Cook was fouled again in the corner. He launched the free-kick from the left and McLean timed his run perfectly to glance his header past Walker for his fourth goal in three games.

The referee was clearly taking no prisoners from the word go and Kynan Isaac received a caution for diving following a tangle with Bryan van den Bogaert. The City winger might have got the free-kick had he stayed on his feet but his extravagant tumble seemed to decide the referee’s course of action.

Anthony Acheampong made an important challenge ahead of James Roberts, stooping low to head back to Hall as the Oxford player threatened to get clear before Arzamendi’s bizarre back pass from 30 yards was lobbed back over his own goalkeeper but just cleared the crossbar, to the home defender’s obvious relief.

The remainder of the half saw little action in either penalty area, though Bubb nipped in ahead of the Fleet defence eight minutes from the break and the advancing Hall had to make a vital stop to send his side in at the break ahead.

The glutinous pitch wasn’t conducive to much passing football and it the second half was much similar to the opening 45 minutes with plenty of toil in midfield but with scant opportunity for the killer pass into the forwards. Five minutes in, Kedwell almost created his own opening from a free-kick, bouncing the ball on his instep as he ran forward, firing wide with the resultant shot.

Fleet enjoyed a period in the ascendancy then, Cook’s fine cross picking out Godden at the far post who had two bites at the cherry, both on target but both blocked in the six-yard box. Walker then got down to deny McLean from a low shot.

But on 55 minutes, Oxford were thrown a lifeline. Isaac wriggled clear on the flank, got behind the Fleet line and sprinted into the box where he was clearly brought down. Hall, however, judged Bubb’s penalty perfectly, diving to his right to push away the spot-kick. Rather than be too disheartened, the miss seemed to spur City on and they drove at Fleet’s midfield, pushing them back little by little.

That said, it was Fleet who continued to have the better chances. Kedwell and Godden combined to cross into Stuart Lewis’ path but his powerful effort hit a well-placed defender. Kedwell again supplied Godden on 65 minutes with a bravely won header, but Walker was alert to the effort and McLean was only inches away from sliding on to a free-kick into the box.

And 11 minutes from time came the first of two big talking points. Kedwell made to control the ball wide on the left and Reece Fleet came charging in with a challenge that was over the ball. Kedwell reacted to earn a yellow card, Fleet was issued a straight red and numerous players from both sides came together in confrontation.

The visitors then gave Reiss Greenidge his debut in place of van den Bogaert, while Danny Haynes was on for McLean, as City continued to probe despite their reduction to 10 men. Fleet seemed to have kept the home side at bay until the latter stages of five minutes of time added on. A free-kick was awarded on the edge of the box. As it was crossed in, goalkeeper Walker – up from the back – seemed to barge into a Fleet defender and most of the travelling fans assumed the referee had blown for that infringement. Instead, he pointed to the spot for a second time and showed Kedwell a second yellow, apparently for handball (the fourth dismissal in three fixtures against City this season).

Bubb – the man who scored the penalty for Farnborough after Preston Edwards’ abrupt dismissal back in 2011 – made no mistake this time and buried his kick to leave Fleet disappointed at the final whistle.

Ed Miller has been Ebbsfleet United's communications manager and programme editor since 2014 and responsible for the club website since 2007. Contact him on ed.miller@eufc.co.uk
PrevPreviousThird time lucky for Oxford clash?
NextAcademy home games move to Kings HillNext