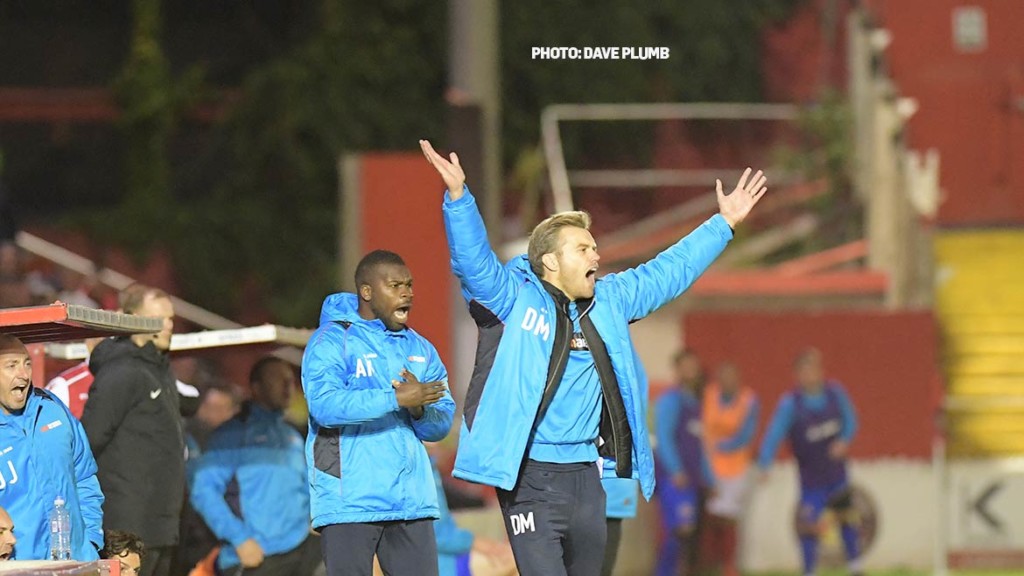 Only the strong survive – Macca not feeling sorry for himself

Daryl McMahon declared that he and his side won’t lie down and surrender after the Fleet lost their fifth home game on Tuesday evening. The Fleet boss believes slender margins are letting the side down at present and that their character will see them through.

“It’s fine lines to win and lose games of football,” he told BBC Radio Kent’s Charles Webster. “We as a group at the moment look like anything that can go against you is going against you and only the strong survive that. You can feel sorry for yourself or you can be a man and stand up and show your character. I think you’ve seen again my team has character and we won’t stop fighting, we’ll keep going.”

Fleet were undone in the first half as Bromley scored from a corner and the penalty spot but the manager thought his side started well before the visitors breached the back line.

“At the time we were playing well, we had 12 set pieces by half-time, we had eight in the first 25 minutes,” said McMahon. “They had one and scored from one and then obviously the penalty. I’m disappointed but I can’t knock  the players’ effort, endeavour and performance as well. Not the result we want obviously again but we have to keep believing and keep doing what we’re doing.

“I don’t think we started slow. It’s a set piece that we’ve not defended well. We actually started really fast, hence the point that we had eight set pieces and I think we’ve gone after them from the start. We’ve done what I asked them to do to be fair but we’ve been undone by two set pieces and we have to lick our wounds now – it’s difficult at the minute – and bounce back.”

Fleet once again went with Michael Cheek and Corey Whitely as the main goal threats, with the absence of Danny Kedwell, Jack King and Andy Drury bringing the average age of the squad down sharply.

“We’ve made a lot of changes in the last two matches,” said McMahon. “The average age on Saturday and tonight has probably gone down to about 23. We have changed in the last two games and we will get errors with that but we’ll also get the exciting play we’ve seen as well.

“That takes time. We’ve probably changed 10 or 12 games in and done something slightly different. We’ve had Bags come in, Cheek, Daz a bit more, Powelly, Ebou, Magri … all young. Did we have one player who was 30 start tonight, Winfield? Everybody else is 26 or below. For this level it is a young team. Keds is a good player, so is Jukebox, we’ve still got good players, don’t get me wrong, but I think it’s important we have legs and fresh players in.”

Adams’ positioning has also been slightly altered in the past few games, with the close-season signing operating a little further behind Dean Rance – and McMahon says that’s starting to get the best out of the former Norwich City youngster.

“Dean’s making Ebou more comfortable in his position,” explained the manager. “He plays that position naturally, that’s always been his position. He’s been outstanding in the last two games sitting in front of that back three. He’s really bossed it, passed the ball well, won seconds as well. He’s been really good and released Dean to go a bit further forward which I think’s helped Dean and he won man of the match tonight.”

Fleet head to Dagenham after a fairly fruitless home return in terms of points but the manager thinks his side have been unfortunate given the balance of play in most games this season.

“We’ve had games here where we haven’t played well and we’ve lost,” he said. “If I’m being honest, we’ve had three or four that we probably should have won that we’ve lost. It’s alright me saying ifs and buts and I know that doesn’t win you games of football. But if you actually watch the match, we’re doing a lot of good stuff that we’re not getting rewarded for at the minute. I wouldn’t say you’re enjoying your football when you’re losing but we’re after teams at the minute. We will keep believing in what we’re doing, we won’t change and we’ll keep showing the fight and energy that we have done tonight.”

Ed Miller has been Ebbsfleet United's communications manager and programme editor since 2014 and responsible for the club website since 2007. Contact him on ed.miller@eufc.co.uk
PrevPreviousFleet 1-2 Bromley
NextFleet to support World’s Biggest Coffee Morning this FridayNext